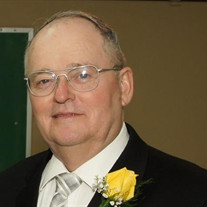 Rev. Max James Kaster, 78, of Gaffney, died Tuesday, October 6, 2020. Max James Kaster was born on October 25, 1941 to Dorothy Jean Kaster, nee Williams; and James Benjamin Kaster, in Shelbyville, Indiana. Raised in Fairland, and forever a Hoosier, no matter where the Navy or the ministry took him, he always identified himself as “an Indiana farm boy.” In 1959, he graduated from Fairland High School, where he played basketball, ran track, played the trumpet in the band, and was a Boy Scout bugler. Max joined the Navy right out of high school. During his time on active duty in the Navy, he served aboard the USS America (CV-66) where he was a plankowner, USS Lexington (CV-16), USS Laffey (DD-724), and the USS Topeka (CL-67). He was stationed on both coasts and visited many European and Mediterranean ports. He was a proud member of the Royal Order of the Shellback. On February 25, 1962 Max married Linda Ruth Chancy. After surrendering to preach and being licensed from Faith Baptist Church in Racine WI, he began to preach in the Rescue Mission, teach Sunday School and hold 5-Day Clubs in the summer time before beginning Bible school. Max graduated from Bob Jones University in 1975 with a BA in Bible. He graduated from Bob Jones University in 1984 with a Master’s in Divinity. While a “Preacher Boy,” he pastored Faith Baptist Church (Poe Mill) in Greenville, SC from 1971-1975. While pastor at Faith, he encouraged and helped support the first Baptist International Missionaries to Senegal, West Africa. In 1975, under Bob Jones University’s church-planting program, he founded Faith Baptist Church in Sweetser, IN, which is still in existence. Returning to South Carolina in 1979, he pastored Morningside Baptist Church in Greenville, SC, from 1979-1986, launching the building program that finds them in their current home on Pelham Road. At Morningside, Pastor Kaster initiated teenage mission trips to the Bahamas, Nova Scotia, and the western United States. Max pastored Grace Baptist Church in Landrum, SC, from 1986-1994, where he also served as Head Administrator for Grace Christian School. He pastored Calhoun Baptist Church in St. Matthews, SC, first as interim pastor, from 1995-2014, where he was that church’s longest-serving pastor. While at Calhoun, Pastor Kaster served on the Orangeburg/Calhoun Countries Foster Care Review Board. Each June he sponsored an “I Love America” program to teach and remind attendees of our Christian American heritage. Pastor Kaster particularly enjoyed role-playing one of the founding fathers. During his time at Calhoun, he began an after school Bible club with the help of several faithful members at the Sandy Run Elementary School. Max served in the SC Army National Guard’s first Hawk Missile battery in 1992-1993. He served on the SC Governor’s counter-narcotics task force from 1993—1994. Max served in the SC Army National Guard as an avionics technician at McIntire Air Force Base, from 1994-2001. When he retired in 2001, he had 42 years, 11 months, and 3 days in uniform. Max was awarded the Navy Meritorious Service Medal, Army Achievement Medal, Navy Good Conduct Medal (x5), Army National Guard Achievement Medal, National Defense Service Medal, Humanitarian Service Medal, and the Armed Forces Reserve Medal. Max enjoyed fishing, even though his enthusiasm exceeded his expertise. His favorite pastime was “making sawdust,” and his enthusiasm and expertise were equally high. Max is predeceased by his beloved friend and pet of 14 years, Choc. He is predeceased by his parents and his elder sister, Sandra Sue Kaster. He is also predeceased by his mother-in-law, Ruth Darsey; two brothers-in-law, Rick Porter and Lawrence Chancy; and a sister-in-law, Loraine Simmons Halloran. Max is survived by his sister, Marlene Porter, and his brother-in-law, James Chancy. He is survived by his wife of 58 years, Linda Ruth Kaster. He is survived by his five children, Jonathan Kaster (Stephanie), Jenni Mason (James), Jefferson Kaster (Alison), Jackie Bradfield (Jason), and Joshua Kaster (Deb). He is survived by ten grand-children: Matthew Kaster (Jordan), Thomas Kaster, Timothy Mason, Jenna Mason, James Mason (Thea), Virginia Kaster, James Benjamin Kaster II, Caroline Kaster, Jonathon Bradfield, and Jacob Bradfield. The funeral service for Rev. Kaster will be held at 12 o'clock, Monday, October 19th, at Shives Funeral Home, Trenholm Road Chapel, 7600 Trenholm Road Ext., Columbia. Burial with military honors will follow the service at 2 o'clock, at Fort Jackson National Cemetery, 4170 Percival Road, Columbia. The family will receive friends prior to the service at the funeral home beginning at 11 o'clock.

The family of Rev. Max James Kaster created this Life Tributes page to make it easy to share your memories.

Send flowers to the Kaster family.