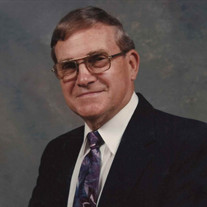 Murdic Bowen went to be with his Lord and Savior on Saturday, December 5, 2020 at the age of 98. He was born on July 20, 1922, in Blaney, South Carolina where he grew up. He was the son of the late Zack and Avie Branham Bowen. He was preceded in death by his beloved wife of 72 years, Beulah Monroe Bowen. Murdic was a loving husband, father, grandfather, great-grandfather, and great-great grandfather to his family and enjoyed spending time with them. Surviving are his three daughters, Beverly Nates (Larry), of West Columbia, Glenda Morris (Mike, deceased), of Decatur, AL, and Lynn Nelson (Mike), of Elgin; six grandchildren, Gina Nates Henderson, Kristin Nates McGee, Kim Morris Gaines, Lisa Morris Dutton, Seth Nelson, Zack Nelson; ten great-grandchildren; three great, great-grandchildren; as well as a sister, Beatrice Branham Shirley. He was also preceded in death by seven brothers; and four sisters. His Christian faith was an important part of his life. He lived and shared his faith during the many years he was blessed to live. Anyone that knew him knew he believed in the power of prayer and he instilled that in his children. As an active member of Highway Pentecostal Holiness Church for over 70 years, he faithfully served his church in many capacities including deacon, Sunday school teacher, and other positions. Over the years he worked in textiles, had a mercantile business and a used car business. His most enjoyment came later in life when he was buying and selling cars that he had refurbished for resale. Murdic was a World War II Veteran. He was in the US Army and was sent to the European Theatre to serve in General Patton’s 3rd Army, HQ Co, 94th Div. in 1942. He was in combat in Germany and other countries until the war was over and received several medals for his service. He often spoke with pride of being chosen to chauffer The Chief of staff and other officials during the war, plus chauffeuring Bob Hope and Jerry Colonna as they entertained the troops. In light of the COVID-19 Pandemic, the funeral service for Mr. Bowen will be private. A livestream of the service may be seen by visiting the Facebook Live Page of Highway Pentecostal Holiness Church at 2 o’clock, Friday, December 11th. He will be laid to rest following the service and military honors beside his beloved wife, Beulah. For those who wish to pay their respects and sign the register, you may do so between the hours of 9 and 6 o’clock, Thursday, December, 10th, at Shives Funeral Home, Trenholm Road Chapel, 7600 Trenholm Road Ext. In lieu of flowers, memorial donations may be made to Highway Pentecostal Women’s Ministries or the Highway Pentecostal Missions Fund at 2290 Heath Pond Road, Elgin, SC 29045. Memories, condolences and a recording of the service may be shared at ShivesFuneralHome.com

Murdic Bowen went to be with his Lord and Savior on Saturday, December 5, 2020 at the age of 98. He was born on July 20, 1922, in Blaney, South Carolina where he grew up. He was the son of the late Zack and Avie Branham Bowen. He was preceded... View Obituary & Service Information

The family of Mr. Murdic Bowen created this Life Tributes page to make it easy to share your memories.

Murdic Bowen went to be with his Lord and Savior on Saturday,...

Send flowers to the Bowen family.