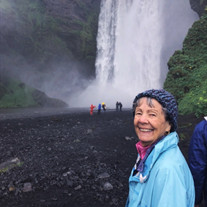 Nancy Hiller Crawford of Columbia, SC passed away on December 18th at the age of 84. She was married to the late Geddings Hardy Crawford for 35 years and is survived by her children, Geddings Hardy Crawford (Karla), Hiller Crawford Davenport (Ty), Jeanne Menge “Boo” Crawford and Robert “Bob” Kendall Crawford. She was known and loved as “Gogo” and is survived by her six grandchildren, Eleanor Crawford, Geddings Crawford III, Sally Branton Crawford, Nancy Davenport, Brig Brannon and Rucker Brannon. She is also survived by her brother, Laddie Green Hiller (Beverly) of Florence, SC. She was predeceased by her father, Bob Kendall Hiller and her mother, Dorothy Lassitter Hiller of Columbia, SC. Nancy attended A.C. Moore and Dreher, graduating from the University of South Carolina. She was an active member of Trinity Cathedral as a prior President of the Daughters of the Holy Cross, Vestry and the Altar Guild. She loved playing golf and bridge with her friends, and traveling the world. Her greatest joy was spending time with her grandchildren, going to sporting events, playing games, summer vacations at Kanuga and giving out candy during church to any child (or treats to any dog), making her a favorite! The service for Mrs. Crawford will be held at 11 o’clock, Wednesday, December 22nd at Trinity Episcopal Cathedral. A private burial for family will precede the service in the churchyard. The family will greet friends following the service in Satterlee Hall at the church. Shives Funeral Home, Trenholm Road Chapel, is assisting the family. In lieu of flowers, the family asks that donations be made to the Trinity Foundation, 1100 Sumter St, Columbia, SC.

The family of Mrs. Nancy Hiller Crawford created this Life Tributes page to make it easy to share your memories.

Nancy Hiller Crawford of Columbia, SC passed away on December...

Send flowers to the Crawford family.