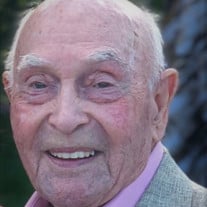 Oliver Lee Boyle, 97, joyously joined his Lord and Savior Jesus Christ on March 9, 2021, to spend a perfect eternity in His presence. His family is enormously grateful for his good health and active life all the way through February 2021. Oliver was born to Charles Oliver Boyle and Minnie Ola Parr Boyle in Weaver, Alabama July 3, 1923, then lived in Gadsden the following 93 years. He was preceded in death by his wife of 56 years, Tisha Harding Boyle; his brother, William James Boyle “Bill” and his wife Doris; his sister, Mary Jean Boyle Runyan and her husband William “Billy” Runyan; and his son-in-law, James “Jim” Crockett. He is survived by his only child, Myra Boyle Crockett; grandchildren, Jace Crockett and his wife Carrie of Lynchburg, VA, Austin Crockett Gawler and her husband Travis of Columbia, SC and Chandler Crockett Pryor and her husband David of Dallas, TX; great-grandchildren, Elizabeth Crockett, Hudson and Finley Gawler, Hayes and Lucy Pryor were his pride and joy. Mandy Buckley Seger and her daughters, Taylor and Lily held a special place in his heart. Cherished nieces and nephews were Sylvia Downey, Gloria Self, Chuck Runyan, Terri Runyan Allbrook, Mark Runyan, Sherry Runyan Sims, Chad Abbott; as well as many great-great nieces and nephews. His love for everyone, especially his family overflowed every day. Oliver was honored to be asked to teach a men’s Sunday School Class at Fairview Baptist Church at a young age. He proceeded to teach at East Gadsden Baptist Church, where he also served as a deacon, for 60 years. He loved the Lord above all else and served Him in every way possible. He was a perfect example of a life well lived. In 2017 he moved to Dallas, TX to be with his daughter, Myra and her husband, Jim. There he made many friends in the neighborhood as well as at Prestonwood Baptist Church in the Davis-Cobbs Class. In March of 2020, the three of them moved to Columbia, SC, where he made many more friends in the neighborhood on his daily walks, and at North Trenholm Baptist Church. Daily, he spent precious time diving deeper into the Word and growing even closer to the Lord. Hearing him pray aloud may have been the greatest blessing he bestowed on his family. His enormous loving heart and friendly positive attitude will be sorely missed by everyone he encountered on his life’s journey. He was a master craftsman; extensively remodeling his home in East Gadsden over the years, building furniture for Myra and American Girl doll furniture for the granddaughters. He excelled as an artist much like his father. The funeral service for Mr. Boyle will be held at 11 o’clock, Tuesday, March 16th at Crestwood Funeral Home and Cemetery, 2209 East Broad Street, Gadsden, AL 35903. Burial will follow in the cemetery. Shives Funeral Home, Trenholm Road Chapel, Columbia, SC, is assisting the family with local arrangements. Crestwood Memorial Cemetery & Funeral Home, 2209 E Broad St, Gadsden, AL 35903 will be assisting the family in Alabama.

Oliver Lee Boyle, 97, joyously joined his Lord and Savior Jesus Christ on March 9, 2021, to spend a perfect eternity in His presence. His family is enormously grateful for his good health and active life all the way through February 2021. Oliver... View Obituary & Service Information

The family of Mr. Oliver Lee Boyle created this Life Tributes page to make it easy to share your memories.

Send flowers to the Boyle family.