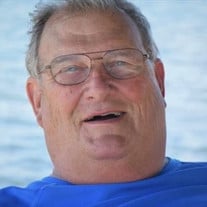 Mr. Phillip Edward Wilson, 72, of Columbia, died on Friday, December 11, 2020. Born May 5, 1948, in Columbia, he was a son of Elizabeth Wilson Cook. Mr. Wilson was raised by his grandmother, Mrs. Maggie Colvin Wilson “Big Mama” and graduated from Dreher High School in 1966. He was a proud US Army veteran that served his country during Vietnam. Phil was a combat veteran who served as a Staff Sergeant with the 173rd Airborne Brigade in Vietnam in 1970-1971. Following his military service, he earned his Bachelor of Science degree in Mechanical Engineering from the University of South Carolina. He was the co-founder and president of Control Management, Palmetto Controls and Sandlapper Controls. Phil was a loving husband, father, grandfather and loyal friend, who loved being the founding member of the “Go Along and Get Along” club. Survivors include his wife of 45 years, Beth Johnson Wilson; daughters, Margaret and John Asay, of Columbia, Dorothy and Jay Chocklett, of Newberry, Bebe and Blake deTreville, of Columbia, Jane and Reid Mobley, of Winnsboro; grandchildren, Eady deTreville, Ward Chocklett, Jane deTreville, Helen Asay, Jack Asay, Wilson Chocklett, Weston Mobley, Blake Mobley; sister, Janet Presnell Hough, of Lancaster. In addition to his mother, Elizabeth Wilson Cook, he is preceded in death by his grandmother, Maggie Colvin Wilson; his mother and father in law, Dorothy and Jack Johnson; and brother-in law, Phillip Benjamin Hough. The Mass of Christian Burial for Mr. Wilson will be private at St. Joseph Catholic Church. The Rev. Msgr. Richard Harris, V.G. will officiate. Friends and family are invited to attend virtually at 11 o’clock, Monday, December 14th, by visiting his tribute page at ShivesFuneralHome.com. Shives Funeral Home, Trenholm Road Chapel, is assisting the family. Memorials may be made to St. Joseph Catholic Church School, 3700 Devine Street, Columbia, SC, 29205; or to Newberry Academy, 2055 Smith Road, Newberry, SC 29108.

The family of Mr. Phillip Edward Wilson created this Life Tributes page to make it easy to share your memories.

Send flowers to the Wilson family.