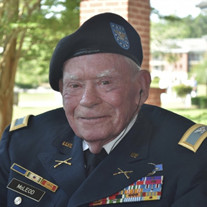 A great man has passed and he will be missed. Purdy Belvin McLeod, Jr., 93, of Columbia, died on Saturday, May 8, 2021. He loved his family, his children, his country, South Carolina - especially the low country, pecan trees, his heritage, his work and his friends, and he loved meeting people and spending time with friends, new and old. Born in Meggett, Charleston County, SC, on August 13, 1927, he was the third child of the late Rev. Purdy B. McLeod, Sr. and Ethel Gertrude Horres McLeod. As the son of a Methodist minister, he lived in many locations and attended many schools in South Carolina until graduating from Conway High School at the age of 16. He then attended Wofford College until joining the US Navy in 1945. He served aboard ships in the Pacific and in Japan at the end of WWII. He returned to Wofford graduating with a B.A. in 1949. He entered active duty as an officer in the US Army after completing the Reserve Officers Training Course, and served in Japan, Korea, the United States, Germany and Vietnam. He retired as an Infantry Colonel in the Regular Army in January, 1975. He married Emily Elizabeth (Betty) Saillant, an Air Force Nurse whom he met while recuperating from wounds he suffered in Korea. They had five children: Gus, Beth, Melly, Jenny and Bruce. Betty died in 1970 and is buried in Arlington National Cemetery. He married Mary Odell England Alves in 1973 (herself an Army widow), increasing the family with her sons, Lance and Richard. Col. McLeod’s military accomplishments consisted of serving in World War II (Navy), Korea and Vietnam (Army). He was twice wounded in combat in Korea and was cited for gallantry in action as a Second Lieutenant in that conflict. Col. McLeod served in many capacities in the US between wars and overseas assignments including service in the Pentagon in the Office of the Joint Chiefs of Staff, National Military Command Center. The awards and decorations for both his Navy and Army service which he was awarded are: The Silver Star; the Joint Services Commendation Medal for wounds sustained in combat; The Combat Infantry Badge for close combat with the enemy; The Bronze Star; The Army Commendation Medal (twice), for Army commendable service overseas and in the US, The Vietnamese Medal of Honor and the Gallantry Cross with Palm; The Presidential Unit Citation and the Korean and Vietnamese Presidential Unit Citations; The United Nations Medal; Campaign Medals for World War II, Korea and Vietnam in addition to various other awards. He was particularly proud of his singular non-military award as the US Clan MacLeod Clansman of the year in 1987. Following his military career he continued his education gaining a master’s degree, then accepted a position in the South Carolina Emergency Division, Office of the Adjutant General. Subsequently, he became the Emergency Management Coordinator in the Office of the Governor of South Carolina, where he was serving during Hurricane Hugo and helped to coordinate the evacuations that saved so many lives. Purdy became a member of the Clan MacLeod Society of America when he met Dame Flora at one of her visits to Washington, DC. He became enthralled that there were more McLeods out there than just his family. He really retired in 1990 to devote his time to the Clan MacLeod, traveling, genealogical research, and other hobbies, not the least of which was keeping up with the kids and their successes. He was a member of the Military Order of the World Wars, The American Legion, The Association of the US Army, The 25th Infantry Division Association, The Retired Officers Association, The Order of the Purple Heart, The South Carolina Law Enforcement Officers Association, The US Veterans of Foreign Wars, The Scottish-American military Society, Scottish Heritage, USA, the St. Andrews Society of Columbia, The Society of Antiquaries of Scotland, FSA (Scot), and has been a member of the Clan MacLeod Society of the USA Since 1970. Col. McLeod is survived by his children, Elizabeth E. McLeod, Mary Ellen McLeod Anderson (William), Jennifer McLeod (Merrick Mixson), and Bruce P. McLeod (Becky); step-son, Richard Alves (Debby); grandchildren Maxwell McLeod Anderson (Veronica), Emily Jean Anderson and John McLeod DeBacker and his great-grandson, Meyer Bennett Anderson, his brother, Cecil Horres McLeod (Karen) and many nieces, nephews, step-grandchildren and great-grandchildren. In addition to his parents, his first wife Betty and second wife Odell, he was preceded in death by his sisters, Nell McLeod Hobbs and Abby McLeod Long, his brother, Laurie A. Mcleod, and his oldest son, Richard Angus “Gus” McLeod. The funeral service for Col. McLeod will be held at 12 noon, Saturday, May 15th, at Shives Funeral Home, Trenholm Road Chapel, with Chaplain Sam Boone officiating. The family will receive friends on Friday evening, May 14th, at the funeral home from 5 until 7 o’clock. Burial will be held in Arlington National Cemetery with the date and time to be announced. For those unable to attend the service, a livestream may be seen by visiting his tribute page at ShivesFuneralHome.com

A great man has passed and he will be missed. Purdy Belvin McLeod, Jr., 93, of Columbia, died on Saturday, May 8, 2021. He loved his family, his children, his country, South Carolina - especially the low country, pecan trees, his heritage, his... View Obituary & Service Information

The family of Col. Purdy B. McLeod, Jr., US Army (Ret.) created this Life Tributes page to make it easy to share your memories.

A great man has passed and he will be missed. Purdy Belvin McLeod,...

Send flowers to the McLeod family.