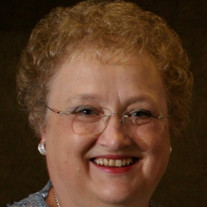 Mrs. Rebecca "Becky" Ford Barkley completed her full life and a yearlong battle with pancreatic cancer on Wednesday, February 10, ending a life of service and contribution. A native of Boone, NC, she was the daughter of the late Marion Glenn and Brooke Stanbery Ford. She graduated from the North Carolina Baptist Hospital School of Nursing in 1969 and had experience as 6th floor head nurse at North Carolina Baptist Hospital, private duty nursing while her children were young, and staff nurse at the Lithotripsy Center in Winston-Salem. As the family moved to Columbia, SC, she joined the staff of the Providence Hospital Eye Surgery Center as staff nurse, eventually becoming Assistant Director and later the Acting Director. Her 25 years at Providence Hospital ended in 2014 but she continued working as PRN for 5 more years. She married Rev. H. E. Barkley, who was serving as Minister of Education at Ardmore Baptist Church, of which she was a member in 1975 and worked in the Preschool Bible Study and Mission organizations. The family moved to Columbia, SC where her husband served as Minister of Education and Administration at Spring Valley Baptist Church. There she immersed herself again in the Preschool area. After his retirement, they joined First Baptist Church of Columbia. At both churches, she became known for her outstanding culinary ability and entertaining. Her love for missions led her to be a part of mission trips to Ecuador, Pennsylvania, Virginia, and Wisconsin and served in the Soup Kitchens in Winston-Salem and at Washington Street UMC in Columbia. At First Baptist, she was on the Welcome Committee as well as the Homebound Committee, visiting homebound members at least once a month. She is survived by her husband of 45 years; son, Michael; daughter, Meredith (Andrew) Murphy and grandson, Luke Ford Murphy. She is also survived by her sister, Marian; brother, Mark (Gail); niece, Erin (John) Patterson and their daughter, Lauren; as well as an aunt, Betty Stanbery (Doug) Hughes all of Boone, NC. A memorial service will be held 2 o’clock, on Sunday, February 14, 2021, at Boyce Chapel of First Baptist Church, Columbia. Shives Funeral Home, Trenholm Road Chapel is assisting the family locally. Please wear face masks and honor social distancing. Burial will follow the next week at the cemetery of her home church, Laurel Springs Baptist Church, in Boone, NC, directed by Hampton Funeral Home. In lieu of flowers, memorials may be made to the Foreign Missions (Lottie Moon Offering), at First Baptist Church, P. O. Box 1000, Columbia, SC 29202.

Mrs. Rebecca "Becky" Ford Barkley completed her full life and a yearlong battle with pancreatic cancer on Wednesday, February 10, ending a life of service and contribution. A native of Boone, NC, she was the daughter of the late Marion Glenn... View Obituary & Service Information

The family of Mrs. Rebecca Ann Barkley created this Life Tributes page to make it easy to share your memories.

Send flowers to the Barkley family.