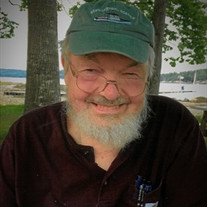 The Reverend James Lloyd Edwards died at his home on Monday, February 22nd after an extended illness. He is survived by his beloved wife, Curry; his son, Brooks of Boykin, SC, and his grandsons, Mitchell and Peyton Edwards, both serving in the US Air Force. He also leaves behind his stepchildren and other grandchildren, Bill Verner and his son, Dash, of Durham, NC and Curry Verner and her children, Duffie and Curry Vinci, of Baton Rouge, LA, as well as two “grandchildren of choice”, Gabbie and Myles Baker Vinci also of Baton Rouge, LA. In addition, he is survived by his cousin, The Reverend Kay Reynolds of Knoxville, TN. Lloyd was born in Morgan City, LA in 1941. He attended public schools in Alexandria, LA and received a BS from LSU in 1963 and a Ph.D. in physics from LSU in 1971. He was Assistant Professor of Physics at East Tennessee State University from 1968-1971. Later, he taught in the mathematics department at the University of Tennessee and taught Comparative Religion, Introduction to Biblical Studies, and Introduction to Religion at Midlands Technical College, Columbia, SC. He entered Nashotah House Episcopal Seminary and graduated with an M.Div. in 1974. He was ordained to the diaconate in 1974 and to the priesthood in 1975. He served at St. George’s Episcopal Church, Nashville, TN, St. Thomas’s Episcopal Church, Knoxville, TN, Trinity Episcopal Cathedral, Columbia, SC, and retired from Church of the Cross, Columbia, SC. Lloyd was the author of three books, Discerning your Spiritual Gifts; How We Belong, Fight, and Pray: Using the MBTI to Understand Congregational Dynamics; and A Place to Breathe: Creating the World God Intended and Still Does. He was a passionate classical and blues pianist and found great joy in his family, his vocation, his friends, and his music. People who loved him would tell you that none of these facts would begin to capture the depth and breadth of who he was: brilliant, funny, faithful, intellectually and spiritually curious. He would work physics problems for fun and then tell silly jokes that would make his grandchildren roll their eyes. He always thought the jokes were funnier than they did. He built a boat that actually floated and built half of another one. He loved the members of Church of the Cross and they returned that love, and of course he loved his red truck and a good bowl of gumbo. Lloyd never forgot his Louisiana roots. Of all his accomplishments, he may have been proudest of being a member of the LSU Tiger Marching band during college. So to Lloyd, all those who love him say “March on, March on, Lloyd, to Glory Land and laissez les bon temps rouler!” The family holds the deepest gratitude to the loving care and presence of his Prisma Health Hospice Care Team: Kelly Hane, Eva Lyoes, Dr. Karen Jenkins, and Dr. Neemi Simon. They are God’s angels. The memorial service for Lloyd will be held privately. The family will receive friends from 5 until 7 o’clock Saturday, February 26th at Shives Funeral Home, Trenholm Road Chapel, 7600 Trenholm Road Ext., Columbia, SC. The family desires all guests attending the visitation to wear masks and to social distance due to the Covid-19 virus. In lieu of flowers, the family requests that gifts be made to Church of the Cross, PO Box 9561, Columbia, SC 29209 or to Harvest Hope Food Bank, 2220 Shop Rd., Columbia, SC 29201.

The Reverend James Lloyd Edwards died at his home on Monday, February 22nd after an extended illness. He is survived by his beloved wife, Curry; his son, Brooks of Boykin, SC, and his grandsons, Mitchell and Peyton Edwards, both serving... View Obituary & Service Information

The family of Rev. James Lloyd Edwards created this Life Tributes page to make it easy to share your memories.

The Reverend James Lloyd Edwards died at his home on Monday,...

Send flowers to the Edwards family.