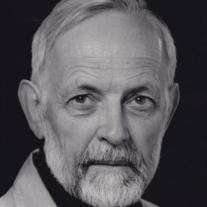 Richard Ieuan Garth Hughes, (RIG), philosopher, scholar, author, poet, singer, composer, actor, and loving husband, father, and grandfather, died peacefully on Monday, January 14, 2013. RIG was born in London, England in 1936. He attended The Highgate School (estab. 1565), earning the school’s coveted Prize for Science. He attended Cambridge University, St. Catharine’s College, graduating with both BA and MA degrees. While at Cambridge, RIG was also a member of The Footlights, an old and venerable theatrical society, and performed in numerous Reviews, plays, and cabarets, composing and performing many of the original songs for these productions. He was also a member of the ADC (Amateur Dramatic Club) of Cambridge, and performed in and directed plays and cabaret acts. He was a member of the Theatre Company at Frinton Summer Repertory Theatre, along with actor friends, Gawn Grainger and Vanessa Redgrave. Following his University years, RIG served his National Service in Her Majesty’s Royal Artillery, followed by a return to London, and to teaching, which became his life’s work. In London he taught at his alma mater, The Highgate School, as School Master, teaching physics and math, directing school plays and musicales, composing music, and teaching such talented students as John Rutter, John Tavener, and David Cullen, who became life-long friends. He also coached the school’s soccer team, a sport he continued to love all his life. While in London, he and good friends, Geoffrey Strachan and Norman (Will) Fyans formed a Cabaret group, The Pedestrians, and performed their original songs and political satire at venues across the UK and at the Edinburgh Festival, accompanied in performances by John Rutter and David Cullen. He later moved to British Columbia, and was School Master at Shawnigan Lake School, before moving to Vancouver to obtain his Ph.D. degree in Philosophy from the University of British Columbia. His subsequent academic career included faculty positions in Philosophy at the University of Toronto, Princeton University, and Yale University, before joining the faculty at the University of South Carolina, where he served as a Professor of Philosophy for over 24 years, retiring in 2012. During his tenure at USC, he served as Visiting Professor at The London School of Economics, the University of Konstanz in Germany, and the University of Oregon. He was a revered teacher, mentor, speaker, and internationally-published author of numerous articles and books on the Philosophy of Science, Physics, and Quantum Mechanics, as well as in the field of Philosophy of Aesthetics and Theatre. He sang in the Columbia Choral Society, and served on its Board; was an actor and member of the South Carolina Shakespeare Company, performing in numerous roles; appeared in roles at Trustus Theatre, Workshop Theatre, and Theatre South Carolina; and was a member of the Columbia Drama Club. It was through his activity in the Columbia theatre scene that he met his wife, Barbara, sharing the stage with her in several productions, and becoming a loving and devoted husband to her until his death. He and Barbara were also members of Chamber Pots, a small group of close friends, formed many years ago for the purpose of enjoyment of classical chamber music in their homes, good food, and the cherished friendships of its members. RIG was preceded in death by his father, John Basil William Hughes; his mother, Mae Hughes; and his brother, Dafydd Hughes. He is survived by his wife, Barbara Lowrance Hughes, and her sons, Steve Lowrance and Paul Lowrance; his son, Nicholas Hughes, and wife, Carolyn, and son, Dylan, of Vancouver, B.C.; his daughter, Kate Birch, and her son, Mats, and daughter, Kaya, of Minneapolis, MN; and many dear friends in England, Canada, and Columbia. The family would like to express its gratitude to the caring and compassionate staff at The Retreat at Covenant Place in Sumter, SC. His memory will live on in all who knew and loved him, through the legacy of his scholarly work, his witty and wise songs, his memorable stage performances, and his remarkable wit and good humor. He was greatly loved and will be sorely missed. A Memorial Celebration of his Life will be held on Sunday, January 27th at 4 PM, at The Heritage, 1829 Senate Street, followed by a reception. Private burial at The First Presbyterian Churchyard will precede the celebration. Memorials may be made in RIG’s memory to the Workshop Theatre Building Fund, PO Box 11555, Columbia, SC 29211; USC Department of Theatre and Dance, College of Arts & Science, Columbia, SC 29208; Trustus Theatre, 520 Lady St, Columbia, SC 29201; or the SC Shakespeare Company, PO Box 50807, Columbia, SC 29250.

The family of Dr. Richard I.G. Hughes created this Life Tributes page to make it easy to share your memories.

Send flowers to the Hughes family.