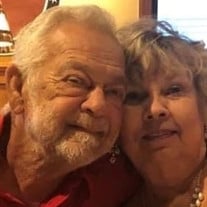 Richard Thomas Sanders Jr., lovingly called Tommy, passed away peacefully surrounded by his family on Friday, April 22nd, 2022, at the age of 78 in his home in Blythewood, SC. Tommy is survived by his wife, Shirley Sanders; children, Stephanie Conness, Steve Sanders, Wayne Sanders, and Bobby Sanders; sister, Amelia Hyman; grandchildren, Victoria Azize, Savannah Azize, Zachary Sanders, Austin Sanders, Grayson Sanders, Brandon Sanders, Michael Sanders, Brittany Sanders, and Michael Sanders; and great-granddaughter, Riley Sanders. Born in Columbia, SC on August 9th, 1943, he was a son to the late Thelma Sanders and Richard Sanders Sr. Tommy went on to work as an Automotive Technician for over 20 years and in 1986 became the owner of Tom’s 66 in Columbia, SC where he retired after 16 years. On October 17th,1965, he married Shirley, a Food Service Manager, and his love at first sight. Tommy was a devoted and beloved husband and father. He enjoyed spending time out on a boat on the lake or at his pond where he spent hours fishing with his family. He often went out to eat and went bowling with his wife where they enjoyed each other’s company deeply. He also had a wonderful passion for being around and working on cars. Whenever possible, Tommy wanted to spend time with his family, and always took care of them as much as he could. He will be greatly missed by his friends, family, and all who knew him. A celebration of life will be held at his home of 30 years, 1236 Lorick Road, Blythewood, SC, on Sunday, May 1, 2022. Please drop in beginning at 2 until 5 o'clock to honor his life. If you have any questions, the family may be reached at (803) 600-3788. Shives Funeral Home, Trenholm Road Chapel, is assisting the family.

Richard Thomas Sanders Jr., lovingly called Tommy, passed away peacefully surrounded by his family on Friday, April 22nd, 2022, at the age of 78 in his home in Blythewood, SC. Tommy is survived by his wife, Shirley Sanders; children, Stephanie... View Obituary & Service Information

The family of Mr. Richard T. Sanders, Jr. created this Life Tributes page to make it easy to share your memories.

Send flowers to the Sanders family.