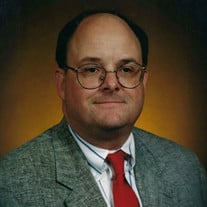 I have fought the good fight, I have finished the race, I have kept the faith. Now there is in store for me the crown of righteousness, which the Lord, the righteous Judge, will award to me on that day -- and not only to me, but also to all who have longed for his appearing. 2 Timothy 4:7-8 NIV Robert Witherspoon Hemphill, Jr., 61, of Columbia, South Carolina, went to his Heavenly Home on Friday, March 5, 2021. A native of Alexandria, Virginia, Robert was born May 5, 1959, to the late Honorable Robert Witherspoon Hemphill of Chester, South Carolina and the late Forrest Isabelle Anderson of Asherton, Texas, while his father was serving South Carolina in the United States House of Representatives, in Washington, DC. Robert grew up in Chester and graduated high school from Catawba Academy in Rock Hill, South Carolina. In 1981, Robert earned a Bachelor of Science degree in Business Administration from the University of South Carolina, where he was a member of the Rho Chapter of Kappa Alpha Order. After working several years in banking with Wachovia in Charlotte, North Carolina, Robert returned to the University of South Carolina and earned his Juris Doctor degree in 1987. Robert enjoyed a thriving legal career in local governmental affairs and lobbying, and provided legal counsel to municipalities and counties during his career. He retired from the South Carolina Association of Counties in 2008. Robert was a gentle, kind, and loving husband, father, and brother. He was a loyal friend to many and saw himself as a peacemaker in all aspects of his life. He was always encouraging, supportive, and shared his optimistic view on life with those he met. Robert was a remarkable man, a true Southern gentleman, and most of all a man and servant of Christ. Despite his health challenges, Robert always had a smile on his face, never complained, kept a positive attitude, and was a witness to many in the way he dealt with the trials and challenges he faced. He sought to live a Christ-filled life each day and taught his family that the Lord, family & friends, and the church were most important in life. He never met a stranger. His quick wit, his cunning humor, and his yearn to laugh with others daily were qualities that made life fun with Robert. Everyone that knew Robert appreciated that he loved all animals – birds, deer, and especially dogs - and that he believed them all to be God’s precious and sacred creations. Robert appreciated the small things in life, whether it be a sweet treat or snack, a cool dip in the water, a joy ride, a sunny day, a handwritten note, a phone call or visit with a friend or family member, or a good home-cooked meal. He was a walking phone and address book and took pride in recalling extended family genealogy and family history. An avid reader and writer, Robert was frequently published in the Columbia Metropolitan Magazine. Robert was also his family’s unofficial proofreader! Robert was an Eagle Scout and was especially proud that both of his sons also earned the rank of Eagle Scout. Robert was a member of the Columbia St. Andrews Society and the Orangeburg and Columbia Kiwanis Clubs, and was a former member of the Charleston Symphony Singers. After retirement in 2008, Robert actively and eagerly volunteered with Shandon United Methodist Church, where he was a loyal and faithful member for many years. In addition to greeting visitors and answering the phone there several afternoons a week, Robert also immensely enjoyed many aspects of the Shandon Church life, including the Monday evening “Sons of Thunder” men’s Bible study, Wednesday’s couples disciple groups, and Thursday’s lunch Bible study with Sam Hunter and Cubby Culbertson. He also took time for the “Reading Matters” program, where he shared his love and passion of the English language with elementary students. Prior to his health challenges, Robert was an avid tennis player and participated in doubles leagues in Charleston, Orangeburg, and Columbia. Music was one of Robert’s biggest joys and a very important part of his life. He learned to play the piano by ear at a young age and continued music training after college. His musical tastes spanned various genres and decades. He sang tenor with the Christ Church Choir in Mount Pleasant, South Carolina and the St. Philips Church Choir in Charleston, South Carolina, and was a voice student of the renowned opera singer June Bonner. Robert is survived by his wife of 27 years, Jane Hagood Reese Hemphill of Columbia, twin sons Forrest Anderson Hemphill and James Hagood Hemphill, Hagood’s fiancé Caroline Hunter Fant, sisters Forrest Hemphill Yanke of Ponte Vedra, Florida and Harriet Witherspoon Hemphill of Ponte Vedra, Florida, nieces Kelly Crowder Taylor (Nelson) of Providence, Rhode Island, and Heather Hemphill Stewart of Jacksonville, Florida, and numerous cousins. A private family service will be held at 3 o'clock Tuesday, March 9th at Shandon United Methodist Church, 3407 Devine Street, Columbia, SC. Please join the family via livestream by visiting Robert's tribute page at ShivesFuneralHome.com. Memorials may be made to the Music Ministry -Shandon United Methodist Church, Boy Scout Troop # 37 -Shandon United Methodist Church, or the charity of one’s choice.

I have fought the good fight, I have finished the race, I have kept the faith. Now there is in store for me the crown of righteousness, which the Lord, the righteous Judge, will award to me on that day -- and not only to me, but also to all... View Obituary & Service Information

The family of Mr. Robert Witherspoon Hemphill, Jr. created this Life Tributes page to make it easy to share your memories.

I have fought the good fight, I have finished the race, I have...

Send flowers to the Hemphill family.