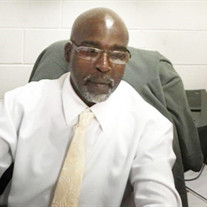 Robert “Rob” Tremayne Kennedy, 50 years old, died April 5, 2021. Born in Winnsboro, SC, on November 17, 1970, he was the son of Rosetta Davis Kennedy Butler and the late Eddie James Kennedy. Rob was a 1989 graduate of Fairfield Central High School and served his country in the US Navy. After serving in the Navy, Rob drove trucks for many years. After 18 years at Capital City Hauling, he worked his way up to not only being the General Manager, but helping to run the entire company for many years. Rob was the type of person who would treat you like family and do whatever he could to help those around him. Survivors include his wife, Angela “Angie” Patton-Kennedy; his favorite aunt, Carol Jackson; children, Soniya Kennedy, Torric Davis, Sterling Kennedy, Brandee Boone, Hunter Boone (Mackenzie), and Daniel Carey; grandchildren, Gauge Bryan, Chandler Davis, Carter Davis and Taylor Davis; as well as special friends, Joel Black and William Cannon. He was loved by many Aunt’s, Uncles and cousins. The family will receive friends from 2 until 4 o’clock, Sunday evening at Shives Funeral Home, Trenholm Road Chapel, 7600 Trenholm Road Ext., Columbia. A military tribute and last call will follow at 4 o’clock at the funeral home.

The family of Mr. Rob Kennedy created this Life Tributes page to make it easy to share your memories.

Send flowers to the Kennedy family.