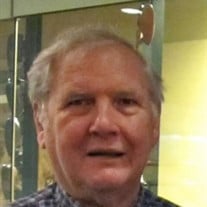 SMSgt Robert James Landrum, SCANG (Ret.), 82, passed away Monday, May 17, 2021, following a brief illness. Born May 31, 1938, in Schofield Barracks Hawaii, Robert was a graduate of Dentsville High School and the Community College of the Air Force. He was a proud veteran of the Air National Guard having served in Spain during the Berlin Crisis and Saudi Arabia during Operation Desert Storm. He retired from McEntire ANG Base as a Senior Master Sergeant. Robert was Past Master of Dentsville Lodge No. 398 and was a member of the American Legion. He will be remembered as a man who loved and treasured his family, especially his children, grandchildren, great-grandchildren, nieces, and nephews. He was their hero, confidant, and the one who never missed a performance, game, or other special events. If anything was broken, they knew if Gramps couldn’t fix it, nobody could. Robert was preceded in death by his parents, Arie Harrison Landrum and Ethel Emmaline Matthews Landrum, and brothers Arie Harrsion Landrum Jr. and Joseph Nance Landrum. He is survived by his wife, Gloria Byrd Landrum, of 63 years, as well as his daughters; Susan (Dan) McCarthy of Columbia, SC and Nancy (Jim) Robnett of Safety Harbor, FL. Also mourning his loss are his grandchildren; Alex Robnett of Middletown, CT, Stephanie (Tyler) Christensen of Oldsmar, FL, and Katie McCarthy of Atlanta, GA; great-grandchildren, Cooper and Roscoe Christensen, and Harley and Laurel Robnett, as well as several nieces and nephews. The graveside service will be held at 11 o’clock, Tuesday, May 25th, at Fort Jackson National Cemetery. A livestream of the service may be seen by visiting his tribute page at ShivesFuneralHome.com. The family will receive friends Monday from five until seven o’clock at Shives Funeral Home, Trenholm Road Chapel, 7600 Trenholm Road Ext., Columbia. The family would like to extend heartfelt thanks to the nurses and doctors at National Healthcare for the excellent care they provided Robert over the past few months. In lieu of flowers, memorials may be made to K9s for Warriors, 114 Camp K9 Road, Ponte Vedra Beach, FL 32081, or Harvest Hope Food Bank, 2220 Shop Road, Columbia, SC 29201.

SMSgt Robert James Landrum, SCANG (Ret.), 82, passed away Monday, May 17, 2021, following a brief illness. Born May 31, 1938, in Schofield Barracks Hawaii, Robert was a graduate of Dentsville High School and the Community College of the Air... View Obituary & Service Information

The family of SMSgt Robert James Landrum, SCANG (Ret.) created this Life Tributes page to make it easy to share your memories.

Send flowers to the Landrum family.