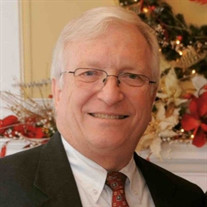 Robert (Bob) Frank Letson, age 72, of Camden, SC, and previously Atlanta, GA, passed away peacefully on Sunday, November 8th surrounded by his family. The family will receive friends at a Celebration of Life at a later date. Shives Funeral Home, Trenholm Road Chapel, is assisting the family. Born in Spartanburg, South Carolina on April 6, 1948, Bob grew up primarily in Louisville, Kentucky and Atlanta, Georgia. Bob earned a Bachelor of Business Administration from Stetson University in 1970. Bob served as a Field Artillery Officer in the Army from 1970-1978 and was honorably discharged as a 1st Lieutenant. Bob earned a Master of Hospital Administration from Georgia State University in 1972 and worked as a Hospital Administrator and CEO for 45 years in GA, MS, AL, SC, ND, and AK. His career earned him the reputation as a strong, supportive leader who put patients, employees, and the community served at the core of all his work. Bob received the American Hospital Association’s Grassroots Champion Award in 2013 for his exceptional leadership in generating grassroots and community activity. Of all his accomplishments, he was always most proud of his roles as husband, father, and grandfather. Bob is remembered for his loving, generous, compassionate nature; witty sense of humor; sound advice; and his ability to connect with anyone. He brightened the lives and hearts of all who knew him. His passions were UGA football, Oldies music, but most importantly, spending quality time with family. He always expressed and showed his wife and children how much he loved them. Bob is preceded in death by his father, Austin K. Letson Sr., and mother, Sara Sue Letson (née Simpson) of Norcross, GA; his brother, Austin K. Letson, Jr. of Charleston, SC; and his sister, Evanne Letson Brock of Marietta, GA. He is survived by his wife, Cristal Hullett Letson; children, Lauren E. Letson, Sarah Noel Luell (Mark), Robert Paul Letson (Jasmine), Ethan W. Shepard, and Colton B. Shepard; five grandchildren, Mark D. Luell III, Chloe E. Letson, Ayden W. Shepard, Dawson R. Shepard, Davis J. Shepard; brother in-law Steve Brock (Karla) and many nieces and nephews. In lieu of flowers, please send contributions to the charity of your choice.

The family of Mr. Robert Frank Letson created this Life Tributes page to make it easy to share your memories.

Send flowers to the Letson family.