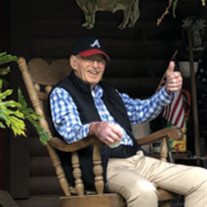 Mr. Robert (Bobby) Walter Loner, Sr. 90, of Blythewood, SC, went to be with his Lord and Savior Jesus Christ on Monday, November 30, 2020. Born on May 28, 1930, in Columbus, Georgia, he was the youngest son of the late Albert Eugene Loner, Sr. and Ethel Lennie (Dolly) Reid. He moved to Blythewood at 2 years of age to the old Loner home on Loner Road. He would carry water from the creek to the house as a young boy. The grandchildren still go and play in that same creek today. He attended Holly Grove school which he walked several miles a day to get there and back. Bobby later went on to graduate from Blythewood School. He married the late Mellie Ruth Harper on July 15th, 1950. They were blessed with 49 years of marriage and had 5 children. He later married the late Lillie Belle Mattox Thigpen and was married for 14 years. He was not afraid of hard work and was a very generous, giving man. His goal was to be a blessing to others like God had blessed him. He retired after 37 years of service to the City of Columbia in the Traffic Engineering Division. Bobby was a skilled electrician and provided electrical services and expertise to many homes and businesses in the Blythewood community and surrounding area. However, his most important post retirement work was just being Pa to his grandkids, great grandkids and many others not related, but also called him Pa. He was saved at the age of 21 and became a member of Sandy Level Baptist church in Blythewood where he served as a Sunday School teacher and deacon for many years and was named Deacon Emeritus. Bobby was faithful in attendance and worship there until he was no longer physically able. He lived his faith, as he talked about the Lord and witnessed to everyone he came in contact with by word and deed. He believed in the power of prayer and instilled that in his children. Bobby loved studying God’s word every day and encouraged his grandkids to memorize scripture. He would give them a 100.00 if they could memorize the book of Ecclesiastes chapter 12. Of course, they had to be able to discuss it and answer questions showing their understanding of what they had read. Bobby attended the Blythewood Masonic lodge where he was a founding member for 68 years. During his time there, he served in various capacities including the Master of the Lodge twice in 1962 and 1972. He truly never met a stranger and spread joy wherever he went in the community from the IGA, to the Post Office, to the Lizards Thicket. He loved to vacation with his family in the mountains and playing putt putt at every course he could find, regardless of the weather. Family and fellowship were important to him. He loved Jesus most of all and leaves a family that is very blessed to have had him as their example of how to live for Jesus. He was predeceased by his sister, Gaynelle Raines; brothers, Albert Loner, Jr., Bill Loner, Jack Loner, Milton Loner; son-in-law, Thurmond Sloan; and grandson, Byron Loner. He is survived by his daughters, Gayle (Wade) Boozer of Blythewood, SC, Debbie Sloan of Blythewood, SC, Paulette (Danny) Drafts of Blythewood, SC; his sons, Robert (Robbie) W. Loner, Jr. (Debbie) of Gilbert, SC and Keith (Dawn) Loner of Blythewood, SC; his sister, Lula Mae (Sue) Turbyfill; 13 Grandchildren; 26 Great Grandchildren; 3 great-great grandchildren; as well as many nieces, nephews and cousins; and numerous others that called him Pa. A memorial service will be held at the graveside at Sandy Level Baptist Church, Blythewood on Friday, December 4th, 2020 at 11:00 am. Shives Funeral Home, Trenholm Road Chapel, is assisting the family. Mask and Social distancing are requested in order to create a safe environment for all. For those unable to attend, a livestream of the service will be available by visiting his tribute page at ShivesFuneralHome.com. A special thank you to Lighthouse Hospice Group in Irmo, SC for their compassionate care. In lieu of flowers, donations may be made to Sandy Level Baptist Church, 408 Blythewood Rd, Blythewood, SC 29016 or The Connie Maxwell Children’s Home, PO Box 1178, Greenwood, SC 29648-1178.

Mr. Robert (Bobby) Walter Loner, Sr. 90, of Blythewood, SC, went to be with his Lord and Savior Jesus Christ on Monday, November 30, 2020. Born on May 28, 1930, in Columbus, Georgia, he was the youngest son of the late Albert Eugene Loner,... View Obituary & Service Information

The family of Mr. Bobby Loner, Sr. created this Life Tributes page to make it easy to share your memories.

Send flowers to the Loner family.