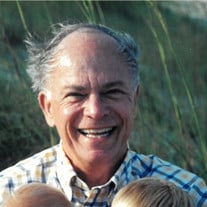 Robert Elliott McElveen was born on June 28th, 1939 in Columbia, South Carolina to George Raymond and Susan Powers McElveen. Robert was the brother of Susan McElveen Graybill and Raymond and Powers McElveen. Robert was the baby of the four (by many years) and his mother enjoyed having him remain at home with her playing Go Fish, rather than attend the neighborhood kindergarten. Robert grew up on Congaree Avenue near Five Points in a neighborhood full of many life-long friends. Some of his best memories were nights spent on the sleeping porch during the summer, rocking on a chair with his mother, and running through the streets barefoot with his friends until sundown. Robert graduated from Columbia High School. During these years, he enjoyed playing basketball, hunting and fishing. Robert loved a good dove hunt with his friends and his trusty golden retriever, Rip, by his side in the fields. Then on to University of South Carolina-a proud life-long Carolina Gamecock and SAE. After college, Robert set his sights on a girl he met in first grade who had recently returned to Columbia with her family. They soon became inseparable, marrying in May of 1965, and truly lived happily ever after. Sally and Robert were blessed with two beautiful girls and lavished all of their attention on their family. Trips to the beach, hunting days in the country, dances, and countless nights spent sharing laughter with a wide range friends across the state South Carolina filled their more than 56 years of marriage. In their later years they spent most of their time at their home in Debordieu. Robert loved time spent in the creeks crabbing with his grandchildren while evenings were times for a good glass of wine, gathering and laughing on the porch overlooking the ocean. Life to Robert was all about his family and good friends. Robert spent his long career in real estate pursuing his passion of development and attending to many commercial real estate projects. Over the years, he built his career and enjoyed many successful partnerships with friends and family. Robert was very private about his ventures because he was not one for fanfare. His humility was one of his most attractive qualities. Robert always knew who he was and never needed any reassurance. Robert’s true love was his family. Outnumbered living in a house with three women, he soon settled the score with a run of three grandsons that he loved and cherished. Each held a special place in his heart, and each loved him unconditionally. He was their hero, and their guardian. They all grew up in his image. He taught them the proper way to catch a lizard, how to throw a cast net, and most importantly how to grow and become a gentleman. He taught them how to be kind. Lastly, the arrival of a granddaughter would complete his family, and steal a bit of his heart in the process. Those who knew Robert knew a man that was humble, hard-working, honest, generous, and kind. Robert’s laugh was infectious and one-of-a-kind. If you were lucky enough to hear it, you went to it, and you laughed right along with it. In typical McElveen fashion, Robert passed away peacefully at his home with his family snuggled up in the bed beside him. This was a spot where the family gathered throughout the years, to share daily thoughts, memories, goals and hopes for the future. Survived by his soulmate and wife of 56 years Sarah Hill McElveen “Sally”, his daughters Gray McElveen Walker and husband Geordie, and Sarah McElveen Hendrick and husband Dave, and three wonderful grandchildren- Randolph, William and Sally. Robert lovingly now joins his beloved 4th grandchild, Robert McElveen Walker, who recently passed away August 1, 2021. The family finds great peace knowing they are together and in the arms of the Lord in Heaven. The family is truly grateful for their circle of friends and the caregivers who have helped them. We especially want to thank Ray Sanders for being our “ray of sunshine” through this journey. Robert was a lifelong member of First Presbyterian Church and served as a Deacon and an Elder. A graveside service will be held Thursday, September 2nd at 2:00 pm, in the churchyard of First Presbyterian Church, 1324 Marion St, Columbia, SC 29201. Shives Funeral Home, Trenholm Road Chapel, is assisting the family. In lieu of flowers, memorial gifts can be made to The Robert Walker Tutoring Fund for Students with Dyslexia. Donations to the Fund can be sent to The Fletcher School, 8500 Sardis Road, Charlotte, North Carolina, 28270 , and would be greatly appreciated.

The family of Mr. Robert Elliott McElveen II created this Life Tributes page to make it easy to share your memories.

Send flowers to the McElveen family.