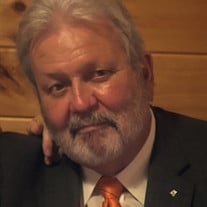 Robert William Mitchum, Sr., 70, of Columbia, died Sunday, October 4, 2020. Born December 23, 1949, in Conway, SC, he was a son of the late Thomas Odell Mitchum, Sr. and Corine Hussey Mitchum. In addition to his parents, he was preceded in death by his brother, Thomas “Tommy” Odell Mitchum, Jr.; sister, Patricia Mitchum Carrigan, brother-in-law, Michael Carrigan and his nephew, Thomas Michael Mitchum. Robert was a lifelong resident of Columbia, where he lived in the Dentsville community and was the “Unofficial Mayor.” He was employed in the construction industry and was the owner of Mitchum Construction Company. Prior to owning his own company, Robert was a US Government contractor, working with the Small Business Administration and FEMA on disaster relief efforts. He also worked in the commercial tire industry, serving as a sales representative for more than 12 years. He was a Mason and member of Dentsville Masonic Lodge #398, the Scottish Rite body, of Columbia, as well as the Jamil Temple. Robert was a long-time member of Northeast Presbyterian Church. He was an active participant in youth sports and was former board member for the DYBSL. One of Robert’s greatest passions was cheering on the CLEMSON TIGERS. He had been attending football games and supporting IPTAY for longer than four decades. Robert had a larger than life personality. He enjoyed visiting with family, friends, and business associates within his community. If you ever had the opportunity to meet Robert, you would never forget him. He will be greatly missed by his family and the community in which he lived. Survivors include his wife, Denise Price Mitchum; sons, Robert William Mitchum, Jr. (Stephanie) of Summerville, Justin Michael Mitchum of Columbia, and Jarrod Christopher Mitchum of Charlotte; brother, David M. Mitchum (Terri) of Elgin; grandchildren, Taylor William Mitchum and Madison “Maddie” Hailey Mitchum; as well as his nieces and nephews, Brittany Bushee, Sean Bushee, Kimberly Carrigan, Thomas Andrew Mitchum, Daniel Todd Mitchum, Sr., and Michael Carrigan. The funeral service for Robert will be held 11 o’clock, Saturday, October 10th at Northeast Presbyterian Church, 601 Polo Rd Columbia, with Reverend Eric Walter and Rev. Dr. George W. Crow, III officiating. Burial with Masonic Rites will follow in the church cemetery. Those who wish to pay their respects to Robert may do so between the hours of 12 o’clock and 7 o’clock, Friday, October 9th, at Shives Funeral Home, Trenholm Road Chapel, 7600 Trenholm Road Ext., Columbia. The family will be present from 5 until 7 o’clock to greet visitors. Everyone is invited to attend but will be asked to abide by the state’s recommendations of wearing masks and social distancing to provide a safe environment for all. A livestream of Robert’s funeral service will be available by visiting https://www.shivesfuneralhome.com/current-webcast/.

Robert William Mitchum, Sr., 70, of Columbia, died Sunday, October 4, 2020. Born December 23, 1949, in Conway, SC, he was a son of the late Thomas Odell Mitchum, Sr. and Corine Hussey Mitchum. In addition to his parents, he was preceded in... View Obituary & Service Information

The family of Mr. Robert William Mitchum, Sr. created this Life Tributes page to make it easy to share your memories.

Send flowers to the Mitchum family.