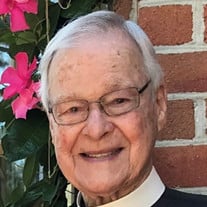 Rev. Robert "Bob" Gambrell Riegel was born on May 20, 1930 in New York City and lived his early years in Larchmont, New York. His father was Theodore Riegel of Riegelsville, Pennsylvania and his mother was Mary Gambrell Riegel of Greenwood, South Carolina. Bob had three siblings: a younger brother, Theodore Riegel Jr., and two older sisters, Elizabeth Hilton and the late Marion McCullough McDonnel. He has been greatly blessed in his marriage to Keren Moore Riegel. Bob has two sons: Robert G. Riegel, Jr. (m. Jeanne) and James F. Riegel. He has two step-daughters: Elizabeth (Buffy) Gilmer Farnsworth and Heather Gilmer Ives (m. Hunter). Bob and Keren have four beloved grandchildren: Elizabeth (Ellie) Riegel, Drake and Hunter Ives and Davis Farnsworth. Bob graduated with highest honors from Mamaroneck High School and won letters in many sports. In 1948 he attended Williams College in Massachusetts earning a BA with a major in Philosophy. In 1952 he entered the Virginia Theological Seminary and earned the degree Master of Sacred Studies. Much later in life Bob received an honorary doctorate from Voorhees College in South Carolina where he had served on the College’s Board of Trustees. Bob’s religious journey began singing in an Episcopal boys’ choir and as an acolyte and bell ringer. While at Williams he was a member of the Williams Christian Association and served as pastor at a Vermont Methodist Church. During seminary he served and led youth work at St. Alban’s Church in Washington D.C. On June 5, 1955 he was ordained a deacon at the Cathedral of St. John the Divine in New York. He was then called to be the assistant at St. Luke’s in Atlanta, Georgia, where he did youth work and took an active part in the pastoral and worship life of that great downtown parish. Bob was ordained a priest there on December 18, 1955. In 1960 he was called to be rector of St. James Episcopal Church in downtown Greenville, S.C. and in 1965 that congregation moved to a new site on Piney Mountain. Bob served at times on the Executive Council of the Upper Diocese of South Carolina and was elected and served on the Standing Committee, being its president for a year. He took an active role in leading youth work in the Diocese and Province of the Church. In October of 1987 Bob was called to serve as Canon for Missions at Trinity Episcopal Cathedral. Later he became Canon Associate Pastor until his formal retirement May 31, 2012. In his final sermon Bob affirmed that he had been mightily blessed in his journey by congregations that were nurturing and accepting and who lovingly shared priesthood with him. At the time of his death, he was the longest serving priest in the Upper Diocese of South Carolina. Bob was a passionate lover of family, friends, and even people he did not know. He was a strong advocate for civil rights and gender equality. He was well-loved for his sermons and pastoral care. He has been variously described as honest, feisty, humorous, challenging, steady, evolving, courageous, loving, devoted, open, vulnerable and earnest. His faith in God was strong and his evangelism for Jesus Christ was consistent. Bob loved and shared in the Diocesan and Trinity Cathedral work in Cange Haiti. He learned much from the people about affirming life and joyfully loving God in spite of terrible poverty, storms and earthquakes. He was excited at the building of a new school to provide post high school education and training in many fields. Bob asked that his retirement gift be for that school. It is appropriate that those wanting to make a memorial gift do so to the attention of: Trinity Cathedral, 1100 Sumter Street, Columbia SC 29201 and designate for the Trinity Foundation or the Bob Riegel Fund for Haiti. A family service will be held 2 o'clock, Friday, February 19, 2021, at Trinity Episcopal Cathedral. Shives Funeral Home, Trenholm Road Chapel, is assisting the family. A livestream of the service will be available by visiting Rev. Riegel's tribute page, along with the church's website.

Rev. Robert "Bob" Gambrell Riegel was born on May 20, 1930 in New York City and lived his early years in Larchmont, New York. His father was Theodore Riegel of Riegelsville, Pennsylvania and his mother was Mary Gambrell Riegel of Greenwood,... View Obituary & Service Information

The family of Rev. Robert G. Riegel created this Life Tributes page to make it easy to share your memories.

Send flowers to the Riegel family.