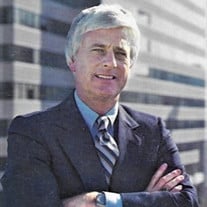 CDR Robert “Bob” Lee Selman US Navy (Ret), 85, of Columbia, died peacefully Tuesday, February 28, 2022, with his family by his side. Born in Foley, Florida, he was the son of the late Frank Leonard and Edna Mildred Stewman Selman. In addition to his parents, he was preceded in death by his brother, Stephen Erwin Selman. Bob is survived by his loving daughters, Gwynne Morey Selman of Schuyler, VA, and Sara Selman Malone (Martin) of Smyrna, GA; granddaughter, Sara Bailes Malone; former wife, Jean Morey Selman of Asheville, NC; siblings, Frank Leonard Selman, Jr., and Vivian Selman King. Bob was a graduate of the University of South Carolina with a BS degree in Business Administration (1959) and he spent 24 years in the US Navy, retiring as a commander. Bob's professional business career began as the first salesperson of the Keenan Company, where he tenured 33 years, becoming Executive Vice President and then advancing to President. The most rewarding years of his professional career were in real estate (1994-2010) when he was hired as administrator for the Real Estate Commission for the state of South Carolina and later became the Deputy Director for the Labor, Licensing and Regulations Department. In 1984, Bob was the President of the Sertoma Club and was awarded The Order of the Palmetto by former Governor Richard Riley. Bob was the chairman of the City Planning Commission and chairman of the Cultural Council for Richland and Lexington counties. In 1987, Bob was awarded The Distinguished Alumni for the Darla Moore School of Business. He also served as the President of the Columbia Chamber of Commerce. In his retirement years, Bob enjoyed challenging his granddaughter's expanding vocabulary through the weekly correspondence of Words for the Day. Bob also enjoyed being on top of technology and helping his friends participate in its advancement. As a member of St. Martin's-in-the-Fields Episcopal Church, Bob especially enjoyed fostering children's programs. A service will be held at 11:30 o’clock, Friday, March 4th at St. Martin’s-in-the-Fields Episcopal Church with The Reverend Mitchell Smith officiating. The family will receive friends following the service in the St. Martin’s Parish Hall. A private family burial will be at Fort Jackson National Cemetery. Shives Funeral Home, Trenholm Road Chapel is assisting the family. In lieu of flowers, memorials may be given to the Clark Fund at St. Martin’s-in-the-Fields Episcopal, 5220 Clemson Avenue, Columbia, SC 29206.

CDR Robert &#8220;Bob&#8221; Lee Selman US Navy (Ret), 85, of Columbia, died peacefully Tuesday, February 28, 2022, with his family by his side. Born in Foley, Florida, he was the son of the late Frank Leonard and Edna Mildred Stewman Selman. In... View Obituary & Service Information

The family of CDR Robert "Bob" Lee Selman, US Navy (Ret) created this Life Tributes page to make it easy to share your memories.

Send flowers to the Selman family.