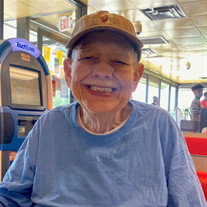 Robert Durden Young, 77, of Columbia, died Sunday, September 20, 2020. Born in Anniston, Alabama, he was a son of the late Robert Lee and Lois Carolyn Mintz Young. Robert Young was loved dearly by his late wife Deborah Ann Bouknight Young, his late Grandson Austin Tyler Ross, and his family and friends. He worked as a machinist for his entire career starting at Rockwell as a young man and retiring from Apex Tool Group in 2011 after a back injury sustained at work. As a proud American he served his country in the Army Reserves as a surgical technician. He was a dedicated father and husband and knew no stranger. He was warm, funny, and such a character you couldn’t help but love him. His favorite past time was reading science fiction, eating, watching cooking shows, and going to grocery stores. Everyone loved him dearly and he will be sorely missed by all who knew him. Survivors include his daughter, Shannon Lee Ross; grandchildren, Coleman Lee Ross and Kimber Breanna Smith; great grandchildren, Tyler Andrew Ross and Kinleigh Joy Ross; siblings, James Ronald Young, Donna Jean Young Watson, Patricia Carole Young Hinson, and Gerald Stanley Young; other beloved family members, Brianna Joy Ross mother of his great grand-children, all of his beloved nieces, nephews, sister in laws, and brother in laws. The celebration of life for Mr. Young will be held at 3 o’clock, Sunday, October 11th, at Shives Funeral Home, Trenholm Road Chapel, 7600 Trenholm Road Ext. The family will receive friends following the service at the funeral home. In lieu of flowers, memorials may be made to Multiple Sclerosis Association of America, 375 Kings Highway North, Cherry Hill, New Jersey 08034, or to cerebral palsy, 3 Columbus Circle, 15th Floor, New York, NY 10019.

The family of Mr. Robert Durden Young created this Life Tributes page to make it easy to share your memories.

Send flowers to the Young family.