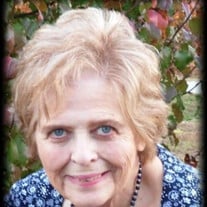 Roxie Anne Chambers, 82, of Columbia, passed away on Friday, May 13, 2022. Born on September 4, 1939, in Columbia, South Carolina, she was the daughter of the late Alfred Capers and Zilla Collins Wiles. Roxie was a long-time member of Eastwood Baptist, which later became Hope Baptist Church, and is where she played as the church pianist for many years. Roxie was the loving wife of 66 years to Russell Brunell Chambers. She graduated from Eau Claire High School. In her down time; she enjoyed sewing, crocheting, and gardening. She had a talent for baking and is known for her famous sixteen-layer chocolate cake. Her most favorite pastime was spending time with her grandchildren and great-grandchildren. She devoted her life to being a military spouse and raising her family. She will be dearly missed for her bubbly and loving spirit. In addition to her husband, she is survived by her sons, Russell Dean Chambers (Susan) and Kenneth Daniel Chambers; daughter, Linda Susan Chambers; grandchildren, Matthew Daniel Chambers (Lauren), Russell Brunell Chambers II, Rachel Lauren Spangler (Jason), Michael Ellingsen, and Drake Kelon Brown; great-grandchildren, Oscar Chambers, Lily Chambers, and Remi Spangler; brother, Alfred Ronald Wiles; and daughter-in-law, Carolyn Wright Chambers. Along with her parents, she is preceded in death by her son, Stephen Charles Chambers; infant daughter, Jennifer Lynn Chambers; brother, Alfred Capers Wiles Jr.; and sister, Beverly Jean Casperson. The family would like to give a special thanks to Linda Kennley and Michelle Thompson for all of the love and care shown towards Roxie during these difficult times. The funeral service for Mrs. Chambers will be held at 2 o’clock on Monday, May 16th, at Hope Baptist Church, 2117 Clemson Road, Columbia, SC 29229. The family will receive friends for visitation beginning at 1 o’clock. Burial will follow at Bowman Memorial Cemetery, 181 Lillie Beth Lane, Bowman, SC 29018. Shives Funeral Home, Trenholm Road Chapel, is assisting the family.

Roxie Anne Chambers, 82, of Columbia, passed away on Friday, May 13, 2022. Born on September 4, 1939, in Columbia, South Carolina, she was the daughter of the late Alfred Capers and Zilla Collins Wiles. Roxie was a long-time member of Eastwood... View Obituary & Service Information

The family of Mrs. Roxie Anne Chambers created this Life Tributes page to make it easy to share your memories.

Roxie Anne Chambers, 82, of Columbia, passed away on Friday,...

Send flowers to the Chambers family.