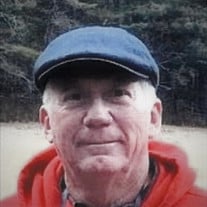 Russell Bennett McGwier of Columbia, passed away on Monday, August 9, 2021, in Columbia, SC, at the age of 74. The graveside service for Russell will held at 10:30 AM, Thursday August 12th at Beth Shalom Arcadia Lakes Cemetery, 1401 Arcadia Lakes, Columbia, SC 29206 with Rabbi Jonathan Case officiating. Shives Funeral Home, Trenholm Road Chapel, is assisting the family. The family requests that face masks be worn for the safety of all attending. Russell was preceded in death by his parents, Frank G. McGwier, Sr. and Myrtle B. McGwier, and is survived by his wife of 42 years, Elaine (nee Berry); children, Sarah of Columbia and Rie of Brooklyn, NY. He is also survived by his brother, Frank G. McGwier, Jr. (Sandra) of Nassau, Bahamas; loving sisters and brothers-in-law, Stan Berry (Helen), Barbara Berry, Lynda Laban (Barry), David Berry, as well as numerous nieces, nephews, great nieces, and great nephews. He was born November 14, 1946, in Birmingham, AL. His family lived in Louisville, KY, Cary, NC, and eventually settled in Columbia, SC in 1963. Russell graduated from Eau Claire High School in 1964 and began his studies at the University of South Carolina that fall. As did many that age, he answered the call of the military to serve his country in the US Air Force, both domestically and in Vietnam. Upon his discharge from the military, Russell continued his education at the University of South Carolina, graduating in 1974 with a Bachelor of Science degree in mathematics. Russell began his career at the South Carolina Department of Social Services. There, he met and fell in love with his co-worker, Elaine Berry. After four and a half years of courtship, they were wed in Columbia on October 29, 1978. The couple welcomed their first child, Sarah, on April 11, 1985, and second child, Rie (Marie) on July 9, 1990. As his family grew, so did his responsibilities at work, progressing to Senior Project Manager. He retired in 2013, continuing his hobbies and interests. Always working in the yard, Russell enjoyed planting and growing both decorative flowers and vegetables, dutifully planning the next year’s improvements. His carpentry skill came in handy with gardening projects, and envisioning future initiatives filled his days. His fanatic devotion to the Liverpool Football Club was legendary (if not occasionally annoying), with Russell going so far to proudly hang an original Liverpool jersey in the family den. His love for the Gamecock baseball program and support of the Boston University Terriers soccer and hockey teams were remarkable. Russell, a season ticket holder for Gamecock Baseball, was known as “The Wingman” on a popular Gamecock internet chat board, demonstrating his interest in not being the lead fervent supporter and loyal fan. Most posts were in the baseball section of the site. His other university affiliation was with the Aspen State Teacher’s College, showing support by the thunderous “Go Brooms” call. Russell also volunteered his time serving in the public library system. Russell and Elaine travelled throughout the Carolinas attending country fairs, artisan trails and craft exhibits. Always, he would acquire various homemade jams, preserves, and coffee mugs, despite ever decreasing cabinet space at home. Russell and his family enjoyed travel to Italy, Canada, as well as throughout the United States and Bahamas. He was diagnosed in January 2021 with Glioblastoma. Russell met the disease valiantly and with noble determination. His attitude and humor inspired family and caregivers alike, as he made the best of a tragic circumstance. Despite the encumbrances of medical devices and restrictions of movement, Russell was heroic in his battle. His family extends deep gratitude to his sisters and brothers-in-law, Barbara, Lynda, Barry, David, and Stan who loved and cared for him not only at the end, but, over the many years. In lieu of flowers, the family requests donation be sent to the Richland County Library, c/o Tina Gills, Development Director, 1431 Assembly Street, Columbia, SC 29201 or Beth Shalom Synagogue, 5827 N. Trenholm Road Columbia, SC 29206.

Russell Bennett McGwier of Columbia, passed away on Monday, August 9, 2021, in Columbia, SC, at the age of 74. The graveside service for Russell will held at 10:30 AM, Thursday August 12th at Beth Shalom Arcadia Lakes Cemetery, 1401 Arcadia... View Obituary & Service Information

The family of Mr. Russell Bennett McGwier created this Life Tributes page to make it easy to share your memories.

Russell Bennett McGwier of Columbia, passed away on Monday, August...

Send flowers to the McGwier family.