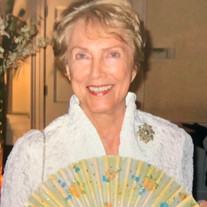 Ruth Jackson Finch, 86, died peacefully at home on August 13, 2021. Ruth was born on November 2, 1934, in Elm City, North Carolina, daughter of the late William Amos Jackson and Jannette Saunders Jackson Livesay. She attended Atlantic Christian College and the University of South Carolina. She lived for many years in Atlanta, Georgia, and was a flight attendant for Eastern Air Lines. Her stories of those times and the people she met became favorite family lore. She met Jim Finch in Atlanta on a blind date, and they married on January 18, 1958. Jim and Ruth were married for 63 years. Ruth was employed by the Methodist Church in each of the three capital cities in which she lived: Raleigh, NC, Atlanta, GA, and Columbia, SC. Ruth and Jim are members of Shandon United Methodist Church. Ruth was a voracious reader and exacting fiction writer. Her mystery thriller Long Weekend was one of five finalists for the 2018 South Carolina Novel Prize, organized by the South Carolina Arts Commission and Hub City Press. Ruth is survived by her husband Jim; daughter; Jannette Finch (Caroline) of Charleston, SC, grandchildren; Lindsay Walker and Patrick Walker (Amanda), and great grandchildren; Caitlyn and Ciaran. She is survived by a brother; Kramer Jackson (Annis) and is predeceased by her younger brother, James L. Jackson. She leaves behind to celebrate her stories and life favorite nieces, nephews, and treasured friends. The family wishes to thank Right At Home Home Care and Amedisys Hospice. Special thanks to Ranesha Muldrow and Dionne Tillis for their exceptional care. A celebration of life will be held at Shives Funeral Home, Trenholm Road Chapel, 7600 Trenholm Road Ext, Columbia, SC 29223, on Wednesday, August 18th, 2021, from 2 until 4 o'clock in the afternoon. In lieu of flowers, memorial contributions may be made to the Richland Library Friends and Foundation or to the Columbia Museum of Art.

The family of Mrs. Ruth Jackson Finch created this Life Tributes page to make it easy to share your memories.

Send flowers to the Finch family.