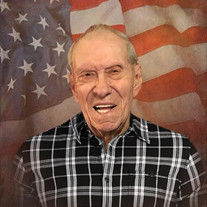 SSG Tom Wilbur Hutson, US Army (Ret.), 91, of Abilene, TX, died Tuesday, July 13, 2021. Born October 11, 1929, in Bamberg, SC, he was a son of the late Wilbur and Lou W. Hughes Hutson. SSG Hutson honorably served his country for more than 20 years in the US Army, until his retirement in 1968. At the conclusion of his military career, he owned and operated two gas stations, as well as worked as a maintenance supervisor for Palmetto Oil and Equipment Company. SSG Hutson enjoyed being outside in nature and the occasional fishing trip. Survivors include his children, Marilyn McDonald (Rusty), Sharon Ripley (Kevin), and Jimmy Hutson (Donna). SSG Hutson is also survived by seven grandchildren and a multitude of other extended family and friends. In addition to his parents, he was preceded in death by his daughter, Pamela Strickland, and several siblings. The graveside service with full military honors for SSG Hutson will be held 2 o’clock, Monday, July 19th at Crescent Hill Memorial Gardens, 2603 Two Notch Rd, Columbia, SC 29204 with Rev. Dr. Robert Winburn officiating. The family will receive friends prior to the graveside service beginning at 1 o’clock at Shives Funeral Home, Trenholm Road Chapel, 7600 Trenholm Road Ext., Columbia, SC 29223.

The family of SSG Tom Wilbur Hutson, US Army (Ret.) created this Life Tributes page to make it easy to share your memories.

Send flowers to the Hutson family.