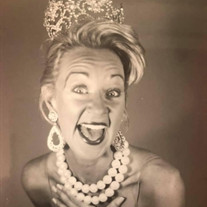 It is with broken hearts that the family of Sabra Anne Coward Lott, a.k.a Bubbles the Blythewood Beauty Queen, announces her tragic passing on Wednesday, January 13, 2021. Sabra was born on November 16, 1967, to Rudy and Anne Coward in Columbia SC. She was a life-long resident of the Blythewood and Columbia communities. She was a graduate of Spring Valley High School, Class of 1986. Sabra went on to receive a Bachelor of Arts degree majoring in drama at Columbia College. She worked in the radio industry for over 25 years, most recently, as a member of the Alpha Media family. Sabra was known for her larger-than-life personality which was on full display as Bubbles the Blythewood Beauty Queen radio personality in the early 1990's on WNOK-FM. Her love for life was undeniable and her smile and laughter was contagious to everyone who knew her. Her GIGANTIC personality outshined her petite stature, lighting up every room she entered. Sabra's generosity extended far beyond family and friends. Her charitable heart made everyone feel special and loved. She was known for her exquisite style, artistic ability, and passion for shopping. Sabra had a flare for putting a unique spin on everything she touched. The mold was broken when Sabra was born! Sabra's biggest achievement in life is her daughter, Mckenzie Anne Lott. Of all of her talents, her best work was done raising her beautiful daughter. The bond she has with Mckenzie is unbreakable. The love they share is eternal. Her legacy will live on through McKenzie. Along with her daughter, Mckenzie, Sabra will be lovingly remembered by her life partner, Bill Goodwin; devoted mother, Anne Coward; brothers, Mark (Stephanie Hammond) and Michael (Rhonda) Coward; niece, Gabrielle Coward; nephews, Kyle Coward, Delson Coward, and Christopher Coward; McKenzie's father, Glenn Lott Jr.; step-daughter, Brandi Lott Williams; and two granddaughters, Phoebe and Baleigh. A reception to celebrate the life of Sabra's life will be held on Sunday, January 17, 2021, at 5 pm at The Farm at Ridgeway, 3248 US-21, Ridgeway, SC 29130. A private gathering will be held prior and may be viewed on Sabra’s tribute page at ShivesFuneralHome.com. Shives Funeral Home, Trenholm Road Chapel, is assisting the family. With every fond memory of Sabra, laughter is sure to follow.

It is with broken hearts that the family of Sabra Anne Coward Lott, a.k.a Bubbles the Blythewood Beauty Queen, announces her tragic passing on Wednesday, January 13, 2021. Sabra was born on November 16, 1967, to Rudy and Anne Coward in... View Obituary & Service Information

The family of Ms. Sabra Coward Lott created this Life Tributes page to make it easy to share your memories.

It is with broken hearts that the family of Sabra Anne Coward...

Send flowers to the Lott family.