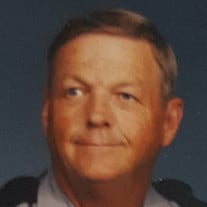 Lieutenant Sam Olin Riddle, Sr., 85, went to be with the Lord on Saturday, April 9, 2022. A celebration of life will be held at Shives Funeral Home, Trenholm Road Chapel, 7600 Trenholm Rd. Ext., Columbia, at 12:30 o’clock, on Tuesday, April 12, 2022. Services will be conducted by Rev. David Knapp and Rev. Jeff Scott. Interment will follow in Greenlawn Memorial Park, Serenity Gardens. The family will receive friends prior to the service beginning at 11:00 o’clock. Serving as active pallbearers will be David Riddle, Austin Price, Bret Laso, David Hilyer, Larry Frierson, Lee Riddle, Jr., and David Bryant. Honorary pallbearers will be Glenn Frierson, Butch Riddle, Rick Collins, Danny Rhodes, and members of the SC Highway Patrol, members of the Richland County Sheriff’s Department, and any law enforcement members able to attend. Honor guard will be provided by the SC Highway Patrol and Richland County Sheriff’s Department. Lieutenant Riddle, widower of JoAnn Watts Riddle, was born on January 31, 1937, in Greenville, SC. He was a son of the late Lonnie and Ruth Godfrey Riddle. A 1957 graduate of Parker High School, he served in the United States Army and South Carolina National Guard. In 1958 he graduated from the South Carolina Highway Patrol School and served as a patrolman in Richland County until 1991 when he retired after 33 years of service. Following his retirement from the Patrol, he worked at Shives Funeral Home and the Richland County Sheriff’s Office Project Hope. He was also a member of the SC Trooper’s Association and the Silver Bears. He was a member of Dentsville Baptist Church for more than 50 years and was most recently a member of North Trenholm Baptist Church. He served as a deacon and on various committees while attending both churches. He loved serving both God and his community. His hobbies included fishing, cooking, working in his yard, and growing vegetables in his garden. He found joy in sharing tomatoes he had grown with friends and family. Survivors include his daughter, Judy Ricard (Tom) of Lexington, SC; his sons, Sam O. Riddle, Jr. (Anna) of Columbia, Wayne Riddle (Sharon) of Lexington, SC; grandchildren, Karlita Ricard of Columbia, Allison Leigh Laso (Bret) of Irmo, SC, JoAnna Hilyer (David) of Lexington, SC, David Beckham Riddle (Cassie) of Houston, TX, Meleah Ann Riddle of Rock Hill, SC, Austin Price (Cedesia) of Gilbert, SC, Autumn Price of Lexington, SC; and a great-granddaughter, Leighann Elizabeth Ricard of Irmo, SC; brothers, Lonnie E. Riddle (Joyce), and John Curtis Riddle; sister, Dolly Wright; sisters-in-laws, Sadie Watts, Jean Frierson, and Barbara Riddle; as well as a number of nieces and nephews. In addition to his wife and parents, Lieutenant Riddle was preceded in death by his sisters, Garrell Sanders and Dorothy Bryant; and brothers, Everett Riddle, Lee Riddle. The family wishes to express their thanks and gratitude to the staff members at Rice Estate and Lutheran Hospice for their care and support during these past few months. In lieu of flowers, donations can be sent to North Trenholm Baptist Church, 6515 North Trenholm Rd., Columbia, SC, 29206

The family of Mr. Sam Olin Riddle created this Life Tributes page to make it easy to share your memories.

Send flowers to the Riddle family.