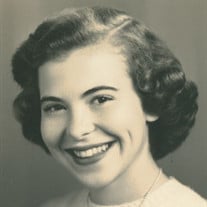 Sandra Jean Peterson Barber, 87, went home to be with the Lord on Sunday, November 15, 2020. Though we miss her so very much, we are happy knowing she is now re-united with her Ronald. She was born July 15, 1933 in Clinton, NC, the oldest of three children of the late Alvah Allen Peterson and Willie Frank Owen. She attended school in Clinton, where she met the boy who would become the love of her life in the second grade. After graduation from Meredith College in 1955, she became an English teacher. In 1956, she married her sweetheart, Ronald, and they went on to raise three children of their own. For 61 years, they built businesses, traveled the world, and served the Lord whom they loved. They were a team in all that they did. She and Ronald served faithfully at Columbia Evangelical Church and Hope Church Columbia for many years. Many missionaries and friends have become family through her legendary hospitality which included her Sunday roast dinners. Sandra had a love of studying and teaching God’s word in various Bible studies within her church and community. She was also the ultimate problem-solver. Many were the recipients of this gift whether it be helping to pack, move, learn to drive, or create a budget. She is survived by three children, Ronald Edward Barber, Jr. (Amy McQuilkin), Cameron Jones (Steven), Alison Alvah Gratton (George); and the joy of her life, 9 grandchildren, Natasha Broucek (DJ), Stephanie Barber, Justin Barber (Nidhi), David Jones (Claire), Joseph Jones (Jennifer), Daniel Jones, Christiana Jones (Pavel), Mary Grace Lobo (Nicholas), Jesse Jones; and 8 great-grandchildren. In addition to her parents, she was preceded in death by her husband, Ronald Edward Barber, Sr. A visitation will be held under the portico of Shives Funeral Home, Trenholm Road Chapel, from 3 until 5 o’clock, Friday, November 20, 2020. The family requests those attending remain in their vehicles to abide by the state's regulations of social distancing. A private family graveside service will be held in Clinton, NC , on Saturday, November 21, 2020 with Joshua Fleming officiating. In lieu of flowers, memorial contributions may be made to Christian Missions, Inc., P.O. Box 3715, Columbia, SC, 29203.

Sandra Jean Peterson Barber, 87, went home to be with the Lord on Sunday, November 15, 2020. Though we miss her so very much, we are happy knowing she is now re-united with her Ronald. She was born July 15, 1933 in Clinton, NC, the oldest... View Obituary & Service Information

The family of Mrs. Sandra Peterson Barber created this Life Tributes page to make it easy to share your memories.

Sandra Jean Peterson Barber, 87, went home to be with the Lord...

Send flowers to the Barber family.