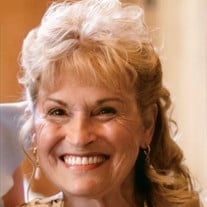 Sandra (Sandy) McKinney Hanna, 75, of Blythewood, passed peacefully from this earth on February 22, 2022 to dance with Jesus! She lived most of her early years in Columbia where she graduated from Columbia High School. Mrs. Hanna moved to Blythewood with her family in 1980 where she lived for the next 42 years. She passionately served her church, Trinity United Methodist in Blythewood through several ministries. She was an instrumental co-leader of her Sunday School Class. She also led the aerobics program, “Get Fit”, for over 40 years as well as numerous other ministries in the church. Mrs. Hanna loved the Lord and spent each day with a sincere heart and genuine smile. She cared deeply for her entire family and was always their biggest fan through life’s occasions. Survivors include her husband, Dannie Byron Hanna, Sr; sons, Dannie (Byron) Hanna, Jr., and his wife, May Killebrew Hanna, of Ridgeway, Fredrick (Bryan) Hanna, and his wife, Theresa Bumstead Hanna, of Blythewood, and Stephen (Brantley) Hanna, and his wife, Jennifer Miller Hanna, of Blythewood; ten beloved grandchildren, three cherished great-grandchildren, and several nieces and nephews. In addition to her parents, Mrs. Hanna was preceded in death by her sister, Sylvia Adkison and her brother, Johnny Mann. A service to celebrate her life will be held at 2 o’clock, Saturday, February 26th, at Trinity United Methodist Church with the Rev. Scott Smoak and Rev. Carsten Bryant officiating. The Hanna’s will receive family and friends at a visitation held from 6 until 7:30 Friday evening at the church. Shives Funeral Home, Trenholm Road Chapel, is assisting the family. Memorials may be made to Trinity United Methodist Church, 90 Boney Road, Blythewood, SC, 29016.

Sandra (Sandy) McKinney Hanna, 75, of Blythewood, passed peacefully from this earth on February 22, 2022 to dance with Jesus! She lived most of her early years in Columbia where she graduated from Columbia High School. Mrs. Hanna moved to Blythewood... View Obituary & Service Information

The family of Mrs. Sandy Hanna created this Life Tributes page to make it easy to share your memories.

Send flowers to the Hanna family.