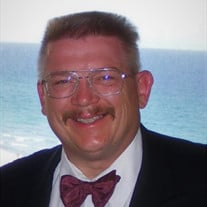 Reverend Spencer Watson Brown, 60, of Lexington, went to his Heavenly home to be with his Lord and Savior on Wednesday, December 2, 2020. Born December 3, 1959, in Charleston, SC, he was a son of the late Clarence Lee and Sarah Faulkenberry Brown. Through 1978-1984 Rev. Brown served as a Fireman for the North Charleston District Fire Department. Rev. Brown began his career in ministry in 1979 and continued spreading the Christian faith for 39 years, until his declining health removed him from the pulpit this year. Rev. Brown took the Lord’s calling to preach as his life’s mission. His passion and zeal for the Great Commission were center to his heart and family. From 1979-1981 he was the youth director for Pittman Street Baptist Church, 1982-1984 was the junior church pastor for Midland Park Baptist Church and received his ministry license, 1984-1985 minister of music /youth ministry for Glady Branch Baptist Church, and from 1986-1987 associate pastor of music at Tall Pines Baptist Church. In 1986, Rev. Brown was ordained and received his first pastoral role from 1987-1992 at Faith Southern Baptist Church. He would go on to work in various capacities from 1992-2000 with the Frontier Baptist Association. While with Frontier Baptist Association, he successfully started and planted Tri-County Baptist Church in Gowanda, NY, where he was the pastor until 2001. From 2001-2003 Rev. Brown was the pastor of Bethel Baptist Church. 2003-2009 Rev. Brown was bi-vocational as a special needs bus driver for Richland School District 2 as well as a Bus Garage Shop Manager. During the 2003-2016 years Rev. Brown served in multiple roles including associate pastor, minister of music, and interim pastor of Dentsville, Union and ended his career as the pastor for Jackson Creek Baptist Church. Rev. Brown was led to Christ by his mother as a young child. She encouraged him to believe in God and would consistently read scripture to him. He loved gospel music and traveled with the Robertson Family Band, singing and playing the bass guitar. Rev. Brown would later travel to churches to witness God’s amazing grace with the band New Faith. He also served on the Christian radio station WKCL in Ladson. Rev. Brown’s greatest accomplishment was his family. He married Connie Lucas Brown and they shared 41 years of marriage together. During those wonderful years, they had three beautiful children. Rev. Brown was a proud father and shared many beautiful memories with his family. He supported them with all his heart. Rev. Brown’s family will remember him not only for his love, but also for his wonderful breakfasts and peach cobblers. He enjoyed wood turning and was a member of the Palmetto Wood Turners. He adored listening to Dr. David Jeremiah and Pastor Charles Stanley. Rev. Brown always appreciated the opportunity to be outside, especially if he was able to go fishing with friends and family. Survivors include his loving wife, Connie Lucas Brown; son, William Earl “WEB” Brown; daughters, Jennifer Brown Kroening (Robert) and Emily Anne Brown; brother, Earl Ashley Brown (Brenda); sisters, Mary Watkins (Terry), Rebecca Davis (Stan), Charlotte Lawhome (Donny), Cindy Wolfe (Ronnie), and Kelly Rhodes (Trey); and his beloved pet Baby Brown. In addition to his parents Rev. Brown was predeceased by his brother, Bart Brown. A memorial service for Rev. Brown will be held at 2:00 o’clock Saturday, December 5th at Jackson Creek Baptist Church, 7778 Two Notch Rd., Columbia, SC 29223. The family will receive friends prior to the service in the church sanctuary beginning at 12:30 o’clock. William “Web” Brown will be officiating. A livestream of Rev. Brown’s memorial service will be available by visiting his tribute page at ShivesFuneralHome.com. Everyone is invited to attend but will be asked to abide by the state’s recommendations of wearing masks and social distancing to provide a safe environment for all. In lieu of flowers, please contact the family regarding memorial donations to assist with medical expenses incurred during Rev. Brown’s illness.

Reverend Spencer Watson Brown, 60, of Lexington, went to his Heavenly home to be with his Lord and Savior on Wednesday, December 2, 2020. Born December 3, 1959, in Charleston, SC, he was a son of the late Clarence Lee and Sarah Faulkenberry... View Obituary & Service Information

The family of Rev. Spencer Watson Brown created this Life Tributes page to make it easy to share your memories.

Reverend Spencer Watson Brown, 60, of Lexington, went to his...

Send flowers to the Brown family.