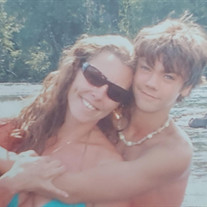 Stephanie Dodson, 48, of Lexington, passed away Sunday, May 08, 2022. She was born in Columbia, S.C. on February 26, 1974. Stephanie was the oldest daughter of Frank A. Brazell and the late Carol Elaine Hinson. Stephanie attended Chapin High School where she made many lifelong friends. Stephanie was known for being very kind hearted and a loyal friend by all who were fortunate to have known her. Stephanie will be remembered by friends and family as an unselfish soul who was more than willing to put forth whatever energy it took to help or assist the people she loved. Stephanie loved nature from an early age, her fondest memories was spending time at the lake and river with family and friends. Her love for plants was another one of her most enjoyable past times. She would propagate plants to give to family and friends. Her love for nature was profound and reflected in her free spirit. Stephanie was especially proud of her son, Harper, and loved to tell everyone what a wonderful and responsible man he has become. In addition to her father, survivors include: her partner of several years, Larry; her son, Harper Ray Dodson, of Banner Elk, N.C.; sister, April Hughes (Josh), of Prosperity, S.C.; brother, Brent Brazell, of Batesburg, S.C.; as well as nieces, Amber and Skylar (April) and Misty Carol (Brent). She was proceeded in death by her Mother; and husband, Scott Dodson. To honor Stephanie’s love for animals, the family requests that, in lieu of flowers, donations be made to an Animal Shelter or Clinic of your choice. A “Celebration of Life” for Stephanie is being planned and arrangements will be announced soon. Shives Funeral Home, Trenholm Road Chapel, Columbia, S.C., is assisting the Family.

Stephanie Dodson, 48, of Lexington, passed away Sunday, May 08, 2022. She was born in Columbia, S.C. on February 26, 1974. Stephanie was the oldest daughter of Frank A. Brazell and the late Carol Elaine Hinson. Stephanie attended Chapin... View Obituary & Service Information

The family of Ms. Stephanie Allison Dodson created this Life Tributes page to make it easy to share your memories.

Send flowers to the Dodson family.