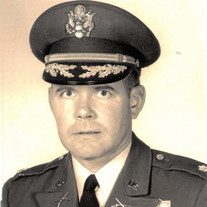 LTC Stephen McIntyre, III, US Army (Ret.), died at his home on Monday, June 28, 2021. Born in Lumberton, NC, he was the son of Dr. Stephen McIntyre and Mrs. Evelyn Boyer McIntyre. Steve graduated from Wake Forest University where he received his commission. His distinguished military career spanned almost 30 years, and he often said, “I did everything in the Army I could do that I thought would be exciting”. Some highlights of his military career included earning badges in Special Forces, Rangers, Pathfinders, and qualifying as Master Aviator and Jumpmaster. He served with both the 82nd and 101st Airborne Divisions. Steve served two tours in Vietnam as a helicopter pilot and commander of a helicopter company. During those tours, he was awarded The Distinguished Flying Cross (2), The Bronze Star (4) and The Air Medal among other awards. He also had overseas assignments in Germany and Iran. From his work as a Unit Training Advisor in Tehran, Iran, he was awarded The Defense Meritorious Service Medal. He was preceded in death by his parents and his son, Christopher McIntyre. Surviving are his children, Stephen “Mac” McIntyre IV, Meg M. Sileo (Mike); sister, Susan M. Goodman (John); and Noel Faulkner, his former wife, and the mother of his children. The graveside service with full military honors for LTC McIntyre will be held at 3 o’clock, Friday, July 23rd at Fort Jackson National Cemetery, 4170 Percival Road, Columbia. Shives Funeral Home, Trenholm Road Chapel, is assisting the family.

The family of LTC Stephen McIntyre, III created this Life Tributes page to make it easy to share your memories.

Send flowers to the McIntyre family.