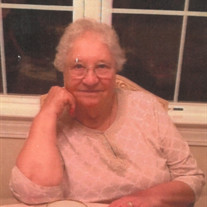 Valentina Grogoriyevna Bosova was born in Danilovka, Volgograd region, Russia on October 14, 1930. Her father Grigori Fedorovich and mother Natalia Grigorievna Bosov had three children (Raisa, Valentina and Iliya). Her brother died young of pneumonia as they didn't have medicine available in the village at that time. Her parents were believers in God and sang in the church chorus. There were two churches in the village that were destroyed by communists when they took power. Her family, including her grandmother, Vasilisa, would gather at someone’s home and read Psalms. It was a big antique book, written in the old Russian language that Natalia inherited after the passing of her mother. Valentina’s search for God’s will was evident throughout her life. There was the suppression of religion in the Soviet Union and she was the teacher and member of the communist party, so she had to be careful. She secretly took her granddaughters to get christened in the remote orthodox church, had the ‘red corner’ in her house where we often observed her praying. She often reminded us to rely on God and if we planned something for the future, said that it will happen if such was God’s will. She was delighted to get her first Bible from her American grandson Chris and cherished the Bible lessons taught by Alexander Ponomarev. In obedience to the scriptures, although she was christened as a child, she decided to be baptized when she was in her 70’s. She experienced some tough times in her life. There was famine in Russia. In early childhood she and her sister would go about 5 kilometers to the nearby river and into the woods to collect river shells, acorns, grasses and mushrooms for food and wood for the masonry stove. In 1938-1939 her father, Grigori to save family from hunger took them to Dushanbe, Tajikistan. She talked about how, during their move, her father found out about the plot that someone wanted to kill them, and a good man gave them a safe place to spend the night. They settled on the outskirts of Dushanbe and build a house out of straw bricks near cotton and mint fields. During plant blossom season, her mother and little brother developed allergic reaction and could not see during the daylight. The family moved back to their motherland. Shortly after, World War II started, and her father went to war. Grigori served under the command of Budyonny in cavalry and was severely wounded in battle and blead to death and was buried in Kharkiv, Ukraine. Valentina told us many stories, but the one that stands out is the story of her having only one dress that she shared with her sister and when one of them went to school, the other stayed on top of the masonry stove waiting for a turn to wear a dress to go out to school. She reminded us to be grateful and cherish what we have. She married Nikolay Grebennikov of Danilovka in February of 1950 and they stayed married until his death on their camping trip to their beloved Medveditsa river in Dinilovka in July of 1986. They were blessed with two children, Tatyana and Alexsey. Going after her dream to be a teacher, in 1950-1954 Valentina studied and received higher education at the Volgograd Teacher’s University. She taught German and Russian languages as well as Russian Literature. In 1965 the family moved from Danilovka to Leningrad where they settled. Nikolay worked for the telephone company, climbing the telephone poles and Valentina was a teacher at middle school. Valentina loved children and taught even after retiring. She was a hard worker and held two jobs to make extra money. She was a great example of making the best out of life’s circumstances and achieving much through hard work. She had a green thumb for gardening and always had beautiful flowers in her yard along with about a dozen apple trees and various berry bushes. She tended to provide for the family growing various vegetables and then canning them for the winter to come. She cared for the people greatly, always willing to help. She loved having people at her house, either renting a room to make extra money or helping extended family members with accommodations as needed. She loved to travel and called herself ‘frog traveler’ as she would fly over the Atlantic ocean many times to visit her daughter and family who immigrated to the USA and her son and family in Russia. In 2007, after 9 years of travel between the two countries, she decided to stay in the United States and was very proud to become the USA citizen in 2012. She was blessed with two granddaughters, Nataliya and Anna from her son, Alexsey’s marriage to Vera and grandson Andrei and granddaughter Irina from her daughter Tatyana’s marriage to Nikolay. As her grandchildren married, she welcomed Dmitri, Victoria, Chris, Alexander, Dmitri and Kateryna to the family and as some have gone, always considered them to be her grandchildren. She was further blessed to see her great-grandchildren, Svetlana and Kirill in Russia and Michael, Katerina, Dmitri and Grigori in the USA. Among many other things, grandmother Valya will always be remembered by her grandchildren and great-grandchildren for that fact that she taught them the Russian language and read them Russian fairy tales. Valentina had an excellent memory and loved reciting many poems. She had an amazing voice and loved to sing traditional Russian songs. As her memory declined due to dementia, huge gratitude goes to her daughter, Tatyana who took excellent care of her through the years. Everlasting memory and God’s mercy to our dearest mother, grandmother, and great-grandmother, Valentina.

The family of Ms. Valentina Grebennikova created this Life Tributes page to make it easy to share your memories.

Send flowers to the Grebennikova family.