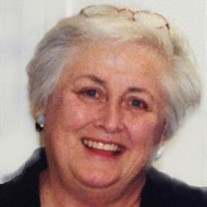 Online services for Virginia DuBose Tuller, 78, will be conducted on Wednesday, July 15, 2020, at 10 o'clock in the morning by the Very Reverend Charles Edgar and the Very Reverend John Barr. Friends are invited to view this service by visiting her tribute page at ShivesFuneralHome.com. A ceremony celebrating her life will be held at a later date when family and friends can be together safely. Mrs. Tuller, widow of William Henry Tuller, died Saturday July 12, 2020 after suffering a stroke that was preceded by a fall. She was a loving and devoted wife, mother, and grandmother. Born on April 8, 1942, in Columbia, South Carolina, Mrs. Tuller was the daughter of the late William Porcher DuBose and Virginia Carroll Jones DuBose. She was a graduate of Columbia High School (but claimed honorary status as a Dreher High School Alumna), and attended the University of South Carolina where she was a member of Delta Delta Delta sorority. In addition to being a full-time mother, Mrs. Tuller was the owner of the Dandy Lion Children’s Store in Columbia from 1978 till 1988. Her community activities included membership in the Junior League of Columbia (serving as vice president), the Colonial Dames of America, the Columbia Assembly (serving as president) and the Huguenot Society of South Carolina. Mrs. Tuller grew up at Trinity Cathedral but was later very involved at All Saints Church Pawley’s Island and instrumental in the founding of Church of the Apostle’s Columbia. What defined Ginny and that for which she will be remembered was her strong faith and love of Jesus Christ, and how she lived by his example. She adored and was devoted to her husband, her two children, and her grandchildren, who called her “GinGin”. The embodiment of a southern lady (albeit somewhat of a card shark), she never met a stranger and enjoyed making friends from all different walks of life. An incredibly generous person, she never stopped sharing her time and positive energy with others. Survivors include daughter, Virginia Beverley Allen Tuller; daughter-in-law, Elizabeth Richmond Tuller McElveen (Louis); grandchildren, William Porcher DuBose Tuller, Jr., Elizabeth Austin Tuller and Virginia Grace Tuller; brother, Carroll Jones DuBose (Deanie); sister-in-law Ella Averyt DuBose; nephews, Carroll Jones DuBose (Susan) and William Porcher DuBose III (Leigh); niece, Beverley Gayle DuBose, all of Columbia; and niece, Dorothy DuBose Engsberg (Towson) of Chattanooga, Tn. In addition to her parents, Mrs. Tuller was predeceased by her husband; son, William Porcher DuBose Tuller; brother William Porcher DuBose, Jr., and niece, Sarah Lawton DuBose. In lieu of flowers, memorials may be made to the Church of the Apostles, 1520 Bull St. Columbia, SC 29201 or Still Hopes Retirement Community, 1 Still Hopes Dr. West Columbia, 29169 or the charity of one’s choice. Memories and condolences may be shared at ShivesFuneralHome.com

Online services for Virginia DuBose Tuller, 78, will be conducted on Wednesday, July 15, 2020, at 10 o'clock in the morning by the Very Reverend Charles Edgar and the Very Reverend John Barr. Friends are invited to view this service by visiting... View Obituary & Service Information

The family of Mrs. Virginia DuBose Tuller created this Life Tributes page to make it easy to share your memories.

Online services for Virginia DuBose Tuller, 78, will be conducted...

Send flowers to the Tuller family.