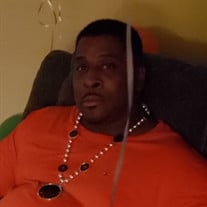 Wayne Ellis Wilson, Sr., affectionately known as “Rhooks” to family, and “Bruce” to friends, was born in Orange, New Jersey on October 19, 1970, to Joseph Wilson and the late Lois Wilson. He fought a hard fight but lost his battle with COVID-19 and was called home on May 14, 2021, in Columbia, South Carolina. His youthful years were spent in Orange New Jersey where he attended elementary, middle, and high school. He was an athlete who participated on the wresting team during his high school years, also training in Karate where he held several championships. Wayne graduated from Orange High School in 1988 and went on to attend DeVry University in Atlanta, Georgia, where he obtained his Bachelor of Science Degree in Computer Science in 1991. During the years after graduation, and until 2005, Wayne worked at several fortune 500 companies including Dow Jones, Pfizer, and Merrill Lynch. Wayne followed his passion for physical fitness, obtaining his Personal Training certification from the National Academy of Sports Medicine in 2005. He trained clients of all levels, but his greatest reward came from the many children with disabilities that he was able to work with. His final career change would happen in 2013 after obtaining his Class A Commercial Driver’s License. He would go on to use that license driving trucks for companies such as Bartlett Milk, Iron Mountain, and Domino’s to name a few. In 2020 this career afforded Wayne the opportunity to move his family from Orange, New Jersey to the Columbia area of South Carolina where he continued to work as a truck driver and essential worker until his passing. On February 14, 1998, in the presence of God, and witnessed by their family and friends at the Messiah Baptist Church in East Orange, New Jersey, Wayne married his true love Sharisse Wilson (AKA Mousiey) whom he had known since he was 12 years old. This union produced three loving children; Wayn-Tiq, Wayne Jr., and Rayne. Wayne was a warm-hearted gentle soul who enjoyed talking about his wife and children. He always had new goals in mind to accomplish, and every one of those goals had something to do with making his family’s life better. He was a very active husband and father, who along with his wife, attended all his son’s football games and daughter’s cheerleading events. He was an avid Dallas Cowboys fan and loved Dragon Ball Z. Wayne loved music and whenever he was around his siblings there was sure to be a dance challenge looming about. He loved dancing so much that even being hospitalized could not stop him from sharing a tender moment with his wife. On a recent visit he mustered up enough strength to sit on the edge of the bed and grab his wife’s hand while the music played. Although unable to stand, they shared what would end up being their last dance together; a memory that will forever be cherished. Wayne was an admirable example of a true family man who’s protective, loving, gentle, and generous ways touched everyone around him. Whether you knew him for years or it was your first time meeting him, he was always a pleasure to be around. He will be dearly missed by everyone that he touched. His work here is done for now, but his memory and legacy will carry on until we are reunited. Left to cherish his memory is his father, Joseph Wilson; loving wife, Sharisse Wilson; 2 sons, Wayn-Tiq Wilson (20), Wayne Wilson, Jr. (15); 1 daughter, Rayne Wilson (13); 2 brothers, Kevin Ments, Curtis Chappel; 1 sister, Keisha Wilson; 5 nephews, Jamar Ments, Ja’von Ments, James Wilson, Jaquan Hargrove, Jaquill Scott; and 3 nieces, Tia McConnell, Chantelle Ments, Tatiyana Wilson. He is preceded in death by his mother, Lois Wilson; 1 sister, TyJuana Wilson; 2 nephews, Tito McConnell and Jamil Ments; and 1 niece, Keesha Wilson. The family would like to express our immense gratitude for your love and support. Your sympathy during this difficult time, has been comforting. We sincerely appreciate every one of you, and will continue to draw on your strength during this time of bereavement. The funeral service for Mr. Wilson will be held 5 o’clock, Monday, May 17th, at Shives Funeral Home, Trenholm Road Chapel, 7600 Trenholm Rd. Ext., Columbia.

The family of Mr. Wayne Ellis Wilson, Sr. created this Life Tributes page to make it easy to share your memories.

Send flowers to the Wilson family.