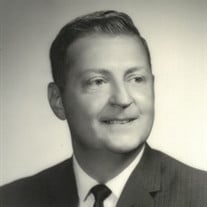 Dr. William Paul Bennett, 94, went to be with our Lord, Jesus Christ, on March 1, 2022. Paul was born on February 1,1928 in Algoma, West Virginia to Grace Bloomwood Vaden Bennett and Dr. James Allan Bennett. Paul completed high school at McCallie School in Chattanooga, Tennessee in 1946. He then graduated from Washington and Lee University in 1950 and immediately entered the University of Richmond for his masters in microbiology. It was there that he discovered a new species of bacteria that he named “Salmonella Westhampton” in 1952. Paul then went on to complete his doctorate in medicine at the Medical College of Virginia. After an internship at Union Memorial Hospital in Baltimore, Maryland, Paul entered The United States Air Force with the rank of Captain as a general medical officer. He was stationed at Shaw Air Force Base in Sumter, SC and deployed to Taiwan as chief medical officer during the Quemoy-Matsu crisis as part of the 507 Communication and Control Group. It was while Paul was stationed at Shaw Air Force Base that he met the love of his life, Norma Thompson. While in the Air Force, Paul was awarded the USAF Commendation Medal, the Armed Forces Expeditionary Medal for Service, and Outstanding Unit ribbon for the 837 TAC Hospital. After being honorably discharged from the Air Force, Paul went on to complete his OB/GYN residency at Columbia Hospital in 1963. He practiced 35 years at the Baptist Hospital where he specialized in microscopic infertility surgery and served as Chief of Staff in 1988. He loved his profession and served as an adjunct clinical professor of OBGYN at the University of SC School of Medicine. Paul loved spending time with his family in Pawleys Island and was the first fisherman to catch a king mackerel off the pier, which started a tradition that still exists today. He loved sports, having lettered in soccer in both high school and college. He was an avid Gamecock fan and was a member of the Gamecock Club since 1972. After Norma passed away in 1997, Paul retired from medicine to become “Chief Nanny” for his one and only granddaughter. He had a special place in his heart for all animals, especially his faithful dog “Susie”. He was a member of First Baptist Church of Columbia, Forest Lake Country Club and The Camilla Ball. He was a devoted Christian, husband, father, grandfather and friend and was loved by all. He is predeceased by his wife Norma Thompson Bennett and his first-born son William Paul Bennett, Jr. He is survived by his son Dr. Allan Thompson Bennett (June) of Bluffton, SC, daughter Catherine Bennett Rhea of Columbia, and his granddaughter Kelsey Elaine Rhea of Charlotte. The family would like to thank their friend Rhonda Grimsley for her excellent care over the years through Still Hope’s Solutions for Living at Home and most recently the Lutheran Hospice for their most excellent care. A graveside service will be held on Sunday, March 6th at Greenlawn Memorial Park at 2pm. In lieu of flowers, donations may be made to the First Baptist Church of Columbia, SC.

The family of Dr. William Paul Bennett, Sr. created this Life Tributes page to make it easy to share your memories.

Send flowers to the Bennett family.