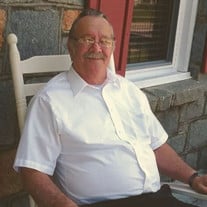 William (Bill) Earl Buff Jr, 83, was called home to his heavenly father on August 4, 2021. He was the son of the late William Earl Buff Sr and Cynthia Higbe Buff. Bill was born on November 7, 1937 in Columbia, SC. He loved God, his family, his church and the Gamecocks. He was a proud and active member of Taylor Street Baptist Church in Cayce, SC and greatly enjoyed attending. In December 2018, he played Grandpa in the church Christmas play and was so excited to participate. He founded and owned Buff's Vinyl Siding and Windows; retiring after 50+ years in 2017. He was well known and greatly respected within the home improvement industry. His favorite pastime was rocking on his front porch, chewing some bubble gum, and saying hello to his neighbors and friends. He spent many years making wonderful memories with his family at Ocean Lakes Family Campground. He also loved to entertain his grandchildren with stories about his adventures in childhood and sharing his never-ending supply of knowledge. He knew it all! And if he didn't he "didn't need to know it!" He was incredibly generous and would give you the shirt off his back without a second thought. And sometimes a fishing rod, too! He is survived by the love of his life, his devoted wife of 60 years, Doris Todd Buff and his "little dog" Lucky. He is also survived by two daughters, Debra Rawls (Billy) and Lisa Allen (Mark) and a son, William Earl Buff III (Carisa). He was blessed with 9 grandchildren: Kristen Smith (Brian), Jennifer Rawls, Billy Rawls III (Misty), Jessica Martin (Anthony), Brandon Clark, Cassy Buff (Jason), Brittany Buff, William Buff IV, and Jamie Buff; and 10 great-grandchildren: Lillian, Logan, Luke, and Layla Rawls, Mattie Goings, Aubrey and Nathan Smith, Arianna and AJ Martin, and James Upchurch; 1 brother, Raymond Buff and 1 sister, Cindy Asmer. He was predeceased by his parents, his sister-in-law, Willie Mae Todd, and his brothers Rev Lloyd Buff and Ronnie Buff. Bill, Papa, Pop you were immensely loved and will be greatly and forever missed. The family would like to thank Dr. Edgar DesChamps and his nurse Ali. They loved "Mr. Bill" and took great care of him for many years. Many thinks to Dr. Bradley Word, who went above and beyond his duty in taking care of Bill. Mrs. Doris Buff would like to add: I would especially like to thank my daughters Lisa and Debra, and my granddaughter Jennifer for their devotion in assisting in the care of Bill and myself this past year. Their dedication to our family has been a testament of their character and loyalty. Bill and I have been so proud to call them ours. Our grandson Brandon has been relentless in helping us with our needs and we could not have subsisted without him. He has been such a blessing. Our son-in-law Billy Rawls has always supported us, his wife Debra, and daughter Jennifer. He is a devoted husband and father and we have relied on his faithfulness. Our son Billy, and his wife Carisa, helped sustain us with their time and attention by staying at our side and helping us when times got hard. God bless all of our children and family. Y'all have been our rock. Pallbearers will be Billy Rawls III, Brandon Clark, William Buff IV, Ronnie Buff Jr, Brian Smith, and Anthony Martin. CDC guidelines will be followed. The funeral service for Mr. Buff will be held at 12:30 o'clock on Saturday, August 7th, at Shives Funeral Home, Trenholm Road Chapel, 7600 Trenholm Road Ext., Columbia. Burial in Gibson Cemetery will follow the service. The family will receive friends from 6 until 8 o'clock Friday evening at the funeral home.

William (Bill) Earl Buff Jr, 83, was called home to his heavenly father on August 4, 2021. He was the son of the late William Earl Buff Sr and Cynthia Higbe Buff. Bill was born on November 7, 1937 in Columbia, SC. He loved God, his family,... View Obituary & Service Information

The family of Mr. William Earl Buff, Jr created this Life Tributes page to make it easy to share your memories.

Send flowers to the Buff family.