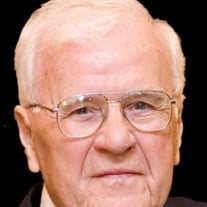 William Walter Halligan, Jr. passed away on September 28, 2020 at age 97 surrounded by his loved ones. Bill was born May 4, 1923 in Clifton Forge, Virginia to the late Kate Anderson Halligan and William Walter Halligan, Sr. After graduating from Clifton Forge High School, he received his BA degree from Hampden-Sydney College and then served in the U. S. Navy during WWII. He later earned a Masters degree in History and Doctorate of Education from the University of Virginia. While studying at UVA he met the love of his life, Dorothy Beadles, and they married in the UVA Chapel in 1950. His career in education began as a teacher and administrator in the public schools of Virginia. In 1956, he moved his young family to Spartanburg, SC to become a professor at Wofford College. After working briefly at the University of Arizona in Tucson, Bill returned to Spartanburg in 1962 to become a professor at Converse College where he later served as registrar and assistant dean until his retirement in 1990. While at Converse he was involved in the creation of the graduate school of education offering the Masters of Arts in Teaching degree. After their retirements, Bill and Dorothy moved to Pawleys Island, SC where they enjoyed almost nineteen wonderful years before moving to the Presbyterian Community in Lexington, SC. During retirement, Bill was an active member of Pawleys Island Presbyterian Church where he served as an elder and as superintendent of the Sunday School. Bill loved the beach where he and Dorothy took almost daily walks. They enjoyed travel both abroad and at home. They particularly cherished time with their four children and their families. Bill is survived by his wife of 70 years, Dorothy Beadles Halligan and by their four children and their spouses: William F. Halligan and his wife Pam of Columbia, SC; Katherine H. James and her husband Mike of Charlotte, NC; Timothy C. Halligan and his wife Ellerbe of Prosperity, SC; and Susan H. Patterson and her husband Mark of Woodbridge, VA. Granddaddy, as he was affectionately called, is also survived by his twelve beloved grandchildren and eight great grandchildren: Elizabeth (and Ed) Black with sons, Hal and Will; Andy (and Katherine) Halligan with daughters, Frances, Molly and Kate; Will (and Samantha) Halligan; Ben (and Brittany) Halligan with daughter Lillian and son Charles; Nancy (and Randal) Ellison with daughter Annie; Abigail (and Chris) James; Dorothy (and Hamilton) King; Sallie James; Brian (and Tory) Patterson; Mary Collins (and Wood) Britton; Scott Patterson; and, Craig Patterson. Bill is also survived by his brother, Joseph M. Halligan of Houston, TX. A private memorial service will be held at Eastminster Presbyterian Church. In lieu of flowers, memorials may be made to the Presbyterian Communities of South Carolina, 2817 Ashland Road, Columbia, SC 29210; Pawleys Island Presbyterian Church, 9967 Ocean Highway, Pawleys Island, SC 29585; or to Hampden-Sydney College, P.O. Box 637, Hampden-Sydney, VA 23943.

The family of Dr. William Walter Halligan, Jr. created this Life Tributes page to make it easy to share your memories.

Send flowers to the Halligan family.