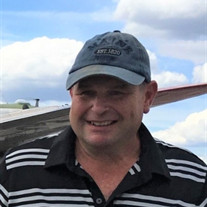 William Andrew “Andy” Jerry Jr., 56, of Columbia, passed away on Tuesday, March 8, 2022. Born on September 25, 1965, in Columbia, SC, he was the son of William Andrew Jerry and the late Elizabeth Dennis Jerry. Andy graduated from Hammond School, where he met many of his life-long friends that affectionately gave him the name “Bogator.” He cherished his many memories with his buddies and loved reminiscing about all of their good times together. He will be fondly remembered for his funny and dry wit sense of humor. While he was a man of few words, he always knew how to make someone laugh. He had a love for music, barbecue, being outdoors, and a good road trip. But nothing made him happier than spending time on the family farm in Calhoun County. Andy was a dedicated person who put a unique touch on everything he did. He was a wonderful craftsman and could fix just about anything! A large part of Andy’s life was spent at the family restaurant, The Mousetrap. He had a gift of cooking, much like his mother, and enjoyed preparing special meals for others. After The Mousetrap closed, Andy decided to pursue a career with McWaters, Inc. In addition to his father, he is survived by sister, Christine Jerry Pool (Rick); nieces, Olivia Laurel Thornton and Grayson Elizabeth Pool; nephew, James Singleton Pool; aunt Ruth Jerry Pilosi; brother-in-law, Thomas Thornton; several cousin, and former wife and companion, Leslie Jerry. In addition to his mother, he is preceded in death by sister, Mary Elizabeth Thornton. The graveside service for Mr. Jerry will be held at 2 o’clock on Friday, March 18th, at Cameron Memorial Cemetery, Cameron, SC. Shives Funeral Home, Trenholm Road Chapel, is assisting the family.

The family of Mr. William Andrew "Andy" Jerry, Jr. created this Life Tributes page to make it easy to share your memories.

Send flowers to the Jerry family.