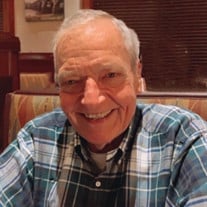 William (Bill) John Leidinger, 81, of Columbia, SC died on Friday, February 12, 2021, following a battle with esophageal cancer. Born in Chicago, he was the son of the late Arthur and Anna Leidinger. Bill grew up in Hanover, IL, and was a two sport athlete at Loras College in Dubuque, IA where he received his BA in History. Following his graduation from the University of Iowa with a Masters of Public Administration, Bill began a long career in business and public service. Bill began his career with stints as Assistant City Manager in Park Forest, IL, and Alexandria, VA. In 1972 he was appointed as the City Manager of Richmond, VA where he served until 1978. After transitioning to executive leadership roles in telecommunications, health care, and banking, Bill continued to represent his community as a member of the Richmond City Council from 1980 to 1990. In 1992 Bill returned to public service as the County Executive of Fairfax County, VA overseeing one of the largest municipal governments in the United States until 1996 after which he served as Mid Atlantic Business Development Manager for Price Waterhouse Coopers. In 2001, President George W. Bush appointed Bill as the Assistant Secretary for Management at the US Department of Education where he was also appointed as the department’s Chief Information Officer. After his relocation to Columbia in 2006, Bill served as the Chief of Staff to the State Treasurer of South Carolina. In retirement, Bill was active in his church as well as several local charities and civic associations. Bill is survived by his wife of 58 years, Karen; their sons Michael (Kim) and Steven (Angie); and their three granddaughters (Mallory, Claire, and Lawson). The family will hold a private Mass in the spring. Memorials in his honor can be made to either the Society of Saint Vincent de Paul, Saint Joseph Catholic Church, 3512 Devine Street, Columbia, SC, 29205; or The Free Medical Clinic, 1875 Harden Street, Columbia, SC, 29204.

William (Bill) John Leidinger, 81, of Columbia, SC died on Friday, February 12, 2021, following a battle with esophageal cancer. Born in Chicago, he was the son of the late Arthur and Anna Leidinger. Bill grew up in Hanover, IL, and was a two... View Obituary & Service Information

The family of Mr. William John Leidinger created this Life Tributes page to make it easy to share your memories.

Send flowers to the Leidinger family.