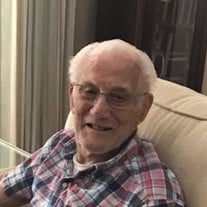 William “Bill” Kenneth Manley, Sr., 91, of Columbia, died at home on Monday, September 14, 2020. Born in Long Island, NY, on November 28, 1928, he was a son of the late Thomas and Laura Susan Junz Manley. On February 1, 1946, at the age of seventeen, Bill decided that he wanted to join the military. He volunteered with the U.S. Army and served on active duty for six and a half years. On September 22, 1952, he received an honorable discharge as a Sergeant First Class. While he was active duty with the U.S. Army, he met and married Doris C. Williams, who was raised in Richland County, SC. Following his discharge from the U.S. Army, he earned his high school GED through the University of South Carolina, attended Draughon Business College and majored in accounting. In May 1956, he joined the South Carolina Army National Guard as an Accounting Technician. After 32 years of faithful service, he retired with a military rank of Chief Warrant Officer, CW4. During his service and throughout his retirement, he became a lifetime member of the National Guard Association and the American Legion Post 6. Bill was very active in the City of Columbia as well as with the Eau Claire community where he lived for over 70 years. He was a charter member of and served on the board of Trustees for the Capital Senior Center. He was a past president of the Columbia Council of Neighborhoods, AARP Chapter 753, chairman of the Legislative Liaison Committee, a member of the Fighting Back Task Force, and the Columbia Area Transportation Committee. Bill had a passion for his community of Eau Claire. He served as the executive director of Eau Claire Community Council, Co-founder of Hyatt Park-Keenan Terrace community group, and a youth mentor at Eau Claire High School. Beginning in 1992, Bill was involved and held many leadership positions with the Rotary Club of Eau Claire. In 2011, the conference room in the Eau Claire Town Hall Building was renamed to the Henry Hopkins/Bill Manley room as an honor to their many years of service to the Eau Claire community. He was a graduate of the Citizen Academies for both the City of Columbia and the Richland County Sheriff’s Department. He was a past volunteer at Prisma Health Baptist Hospital. Survivors include his wife of 72 years, Doris W. Manley, his sister, Liz Fabrizio (Al) of Huntington Beach, CA, children, Brenda Martino, Susan Carpenter (Bobby), Deborah Burrows, and William K. Manley, Jr (Prisha), nine grandchildren, and 11 great-grandchildren. In addition to his parents, he was preceded in death by his sons, Michael E. Manley and Mitchell K. Manley; and a son-in-law, Rickey Martino. The funeral service for Mr. Manley will be held 10 o’clock, Thursday, September 17th, at The Basilica of St. Peter, 1529 Assembly St, Columbia, SC 29201. The Very Rev'd Canon Gary S. Linsky, V.F. Pastor, will officiate. Burial will follow the service in Greenlawn Memorial Park. The family will receive friends on Wednesday evening, September 16th from 5 pm until 7 pm at Shives Funeral Home, Trenholm Road Chapel, 7600 Trenholm Road Extension, Columbia. The family would like to extend a special thank you to Melinda, Rosa and Cindy with Lutheran Hospice for the amazing care provided to him until he was called to his eternal home. In lieu of flowers, donations can be made to Lutheran Hospice at www.lutheranhospice.org/donate.

The family of Mr. William "Bill" Kenneth Manley, Sr created this Life Tributes page to make it easy to share your memories.

Send flowers to the Manley family.