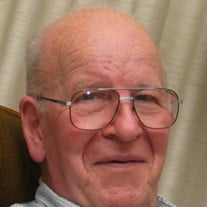 William Alexander McInnis, more often known as Papa, Pops, Dad, Bill, or Sweetie, passed away Saturday, December 18, 2021. Born April 7, 1929 in DeLeon Springs, Florida, he was a son to the late Archibald Clifford McInnis and Louise Scaffee McInnis. Mr. McInnis is survived by his wife of 62 years, Joyce Gibson McInnis; a sister, Barbara Vu of Florida; two children, Judith Lynn McInnis, Jonathan Gibson McInnis (Melissa Bodenheimer); four grandchildren, Laura Svetlana, Ellen Alexandra, Aidan Alexander, and Kathleen Elise “Kate” all of Columbia, along with numerous nieces, nephews, and beyond. In addition to his parents, he is preceded in death by his brothers, Archibald Clifford, Julian Scaffe, Richard Hugh McInnis; and cousin, Williard Alvin Watson. Baseball was a passion growing up, playing with his brothers and Father/Coach, including their local team, The Springers. Later, in family wiffle ball games in the backyard, his beefy first-baseman arms often walked-off the game deep into the neighbor's yard. Bill served three and a half years in the US Marine Corps, having endured recruit training with the infamous Parris Island sand gnats as well as Camp Lejeune. Without family influence he somehow lucked into serving in San Francisco. The most famous story we know involves him and Marine friends getting to hang out backstage post-show with Louis Armstrong. Bill earned an undergraduate degree in sociology from Stetson University and a Masters degree in City Planning from Georgia Tech. He worked with the City of Atlanta Planning Department, then the Central Florida Regional Planning Council in Titusville, Florida. Bill came to Columbia in 1966 to work for the SC State Development Board. He faithfully served the citizens of the Palmetto State in several roles, ultimately serving as the Deputy Executive Director of the Budget & Control Board for Governors McNair, West, Edwards, Riley, and Campbell. He received South Carolina's highest civilian award, the Order of the Palmetto, twice, from Governor John C. West and Governor Carrol A. Campbell, Jr. For many years, he was an avid home bread baker, churning out cinnamon rolls and sandwich bread for friends and family, a skill he acquired working his teen summers at Camp Skyland in Vermont. Bill adopted USC as a proud SC resident, and enjoyed riding the Gamecock sports roller coaster, particularly Frank McGuire-era basketball. Bill often crafted family holiday cards using various techniques and his writing panache. He spent a great deal of time lamenting that his Christmas greeting one year : "From winter would Springwood come" (we lived on Springwood Rd) was not widely hailed as the greatest prose ever. His writing and editing talents were on display in the McInnis-Scaffe-Watson Family Journal he founded and edited for 30 years, showcasing the monthly news and writing of 50-odd (but we love you) relatives. Bill loved genealogical research and his Scottish heritage, serving as the Genealogist for the International Clan MacInnes, building a family tree consisting of over 30,000 individuals. He was also a master term paper editor, we chose wisely when to submit our paltry offerings, as they often returned bloody red, yet far better for the review. Most of all, Bill loved spending time with family (big family reunions were a favorite) and in recent years he especially loved all things grandchildren. He cherished every moment of watching them grow, play, and perform. Having family at home for special events or birthdays was a great joy to him, we are all so thankful that he could be at home in his last days. A graveside service will be held 2 o’clock, Thursday, December 23, 2021, at Elmwood Cemetery, Columbia, SC with an informal visitation following. In lieu of flowers, memorials may be made to Harvest Hope Food Bank (harvesthope.org) or The Carter Center (Cartercenter.org).

The family of Mr. William A. McInnis created this Life Tributes page to make it easy to share your memories.

Send flowers to the McInnis family.