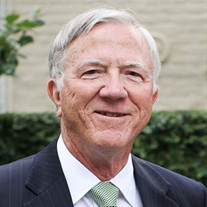 William Sherard Rawson of Davidson, NC, died surrounded by the love of family and friends, on Thursday, July 16, 2020. Dr. Rawson was born March 31, 1935 in Abbeville, SC. He was the son of the late Clarence Weaver Rawson, Sr. and Anne Sherard Wilson Rawson. He was Bill to his friends, Billy to his mother and nephews, and Daddy Bill to his devoted grandsons. A graveside service for the family will be held in the Memorial Garden at Eastminster Presbyterian Church in Columbia, SC, where he was a devoted member for many years. The service will be officiated by the Rev. Dr. Bradley D. Smith, Senior Pastor. Shives Funeral Home, Trenholm Road Chapel, 7600 Trenholm Road Ext., Columbia, SC, is assisting the family. After graduation from the Darlington School in Rome, GA, where both of his parents taught, he attended Davidson College, graduating in 1956 with an A.B. in Economics. Following a brief stint in Charlotte, NC, he earned a Master’s degree at Vanderbilt University, also in Economics. It was at Vanderbilt on the porch at Rand Hall that he met the love of his life, Joanne McBride. The two wed at Reid Memorial Presbyterian Church in Augusta, GA in September of 1964. After two years on the faculty at Shorter College in Rome, GA (whereas head tennis coach he was named Coach of the Year for small colleges in Georgia) he went on to complete his Doctor of Philosophy in Economics at Duke University. Dr. Rawson was appointed to the faculty at University of South Carolina in 1966 and completed his career there, retiring in 1997 as Professor Emeritus of Economics. Always a teacher of students, he served as director of graduate studies in Economics for many years. Dr. Rawson served as a Ruling Elder at Eastminster Presbyterian Church. There was seldom a Sunday that he was absent from Sunday school and church. In retirement he served two terms as the Chair of the Committee on Ministry of Trinity Presbytery. Though a devoted student of economics and theology, his greatest joy was found in the study of and appreciation of jazz music. He donated his lifetime collection of jazz LPs to the Thomas Cooper Library at the University of South Carolina. On one of his last nights on earth, he commented to his grandsons, “I am the last person alive who saw Charlie “Bird” Parker, Louis Armstrong, Duke Ellington, and Count Basie.” Dr. Rawson was predeceased by his brother, Clarence “Buddy” Rawson. He is survived by his wife of 55 years, Joanne McBride Rawson; his daughter, Sherard Anne Rawson Gates of Charlotte, NC and her husband, Tilman Thomas Gates; his son, William Stewart Rawson of Columbia, SC and his wife, Pamela Plowden Rawson, and his devoted grandsons: William Timothy Rawson of Atlanta, GA, McBride Kauders Rawson of Charlottesville, VA, Tilman Thomas Gates, Jr. of Charlotte, NC, and William Rawson Gates of Charlotte, NC. The family wishes to thank Ruth Exis of Novant Health Presbyterian Medical Center in Charlotte, NC for the love and care that she showed him at the end of his life. Memorials may be sent to the American Diabetes Association, P.O. Box 15829, Arlington, VA, 22215 or by visiting www.diabetes.org. Memories and condolences may be shared at ShivesFuneralHome.com.

William Sherard Rawson of Davidson, NC, died surrounded by the love of family and friends, on Thursday, July 16, 2020. Dr. Rawson was born March 31, 1935 in Abbeville, SC. He was the son of the late Clarence Weaver Rawson, Sr. and Anne Sherard... View Obituary & Service Information

The family of Dr. William Sherard Rawson created this Life Tributes page to make it easy to share your memories.

William Sherard Rawson of Davidson, NC, died surrounded by the...

Send flowers to the Rawson family.