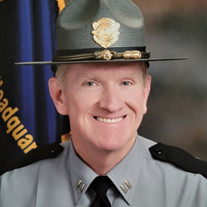 CPT William Sherman “Opie” Reid, 76, of Columbia, died of a sudden illness Saturday, April 17, 2021. Born in Spartanburg County, SC, he was a son of the late William Bramlett and Ruby Irene Coggins Reid and married to Linda Jackson Reid for 54 years. Opie served his country in the United States Army and retired as a captain with the South Carolina Highway Patrol after 42 years of service. He also completed training at the FBI National Academy and with the United States Secret Service. Opie led by his example as a deacon at North Trenholm Baptist Church and served on numerous church committees. He liked helping the widows and senior adults in the church with their yards and driving the church bus on trips. Opie enjoyed his home in the mountains and served as the homeowners association President for 11 years. He relished the time he spent with Linda, traveling to see the world. Their love for each other was evident to all. Opie’s love for the Lord, his wife, family, and others was demonstrated by his selfless life and his absence will be felt by many. In addition to his wife, he is survived by his brothers, Gene Reid of Inman, Gerald Reid (Sue) of Thomaston, GA, Marvin Reid (Sherry) of Campobello; and godchildren, Lane and Sarah Grace Calcutt. Along with his parents, he is preceded in death by his son, Duane Reid; brother, James Reid; and sister, Juanita Reid Kimbrell. A service will be held 1 o’clock, Thursday, April 22nd, at North Trenholm Baptist Church. The burial will follow the service in Greenlawn Memorial Park. All are invited to attend; however, masks are required, and social distancing is enforced to maintain a safe environment for all. A livestream may be viewed by visiting Opie’s tribute page at ShivesFuneralHome.com. The family will receive friends Wednesday evening from four until seven o’clock at Shives Funeral Home, Trenholm Road Chapel, 7600 Trenholm Road Ext. Memorials may be given to North Trenholm Baptist Church, Finish the Race Fund, 6515 North Trenholm Road, Columbia, SC 29206.

The family of CPT William Sherman "Opie" Reid (Ret.) created this Life Tributes page to make it easy to share your memories.